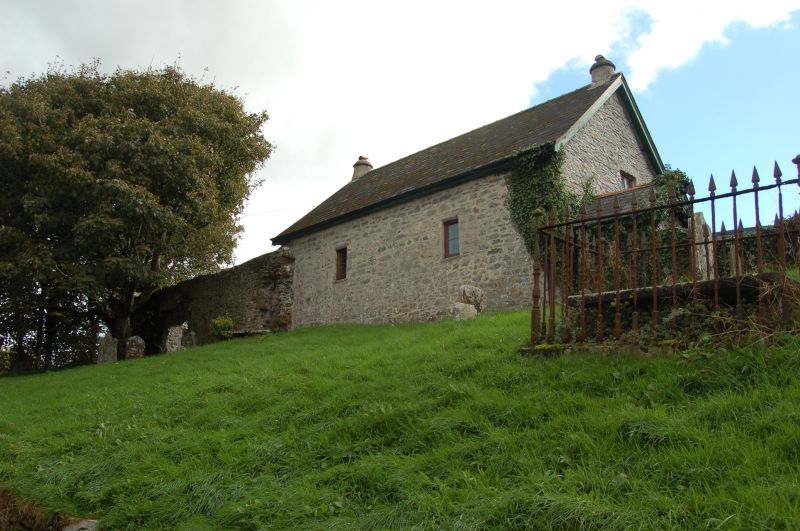 Location: At S side of Manorbier Churchyard, uphill from the S porch.

On the site of Church Hill Cottage is structural evidence of perhaps 5 buildings. It is traditionally thought that these buildings are (or incorporate remains of) a grange established after Sir John de Barri granted the Church to the Priory of Monkton in 1301. [In addition to the cottage itself there are (A) a building in tandem to the cottage to its E; (B) a building to the S of ‘A’ and at right-angles to it; (C) a building lying to its S; and (D) a building at the SW corner of the cottage garden. These are separately listed.] The Churchyard and the cottage site are both recorded as Rectorial Glebe in the 1840 Tithe Survey. Fenton (1810) refers to ‘no small remains of some chantry or collegiate building there being one large building still covered with a vaulted roof but entirely open to the west.’

Referring to the building now called Church Hill Cottage, in 1842 Lewis says it was then in use as a school for 80 to 90 children, established ‘recently’, and ‘improving, chiefly due to the exertions of Rev. Henry Hughes.’ Barnwell (1877) says the ruined W end was built up c.1850 and the room used as a schoolroom, but that it later became a cottage for the clerk. He casts doubt upon the origin of these buildings as a grange or chantry.

Local information is that a school was held here until c.1900. The cottage and ruins were Church property until 1947 when sold into private ownership.

Church Hill Cottage is a rectangular building in rubble masonry, slightly battered at the foot. It has a pointed stone vault 7.5 m high. It has a modern porch at W and a small modern wing at s. Small round-stack end-chimneys. The W chimney may be a dummy and there is no corresponding fireplace and no flue is known. The E chimney is functional. Its flue is in the wall thickness. There is also a bread-oven in the NE corner, now concealed. Roof covering of artificial slates with a large eaves overhang. Small square-headed windows facing the churchyard at high level. The tall pointed vault is visible internally and its neatly constructed extrados is visible i the roof space. Possibly C15.

Included at Grade II* for the exceptional historic importance of the late medieval vaulted structure.