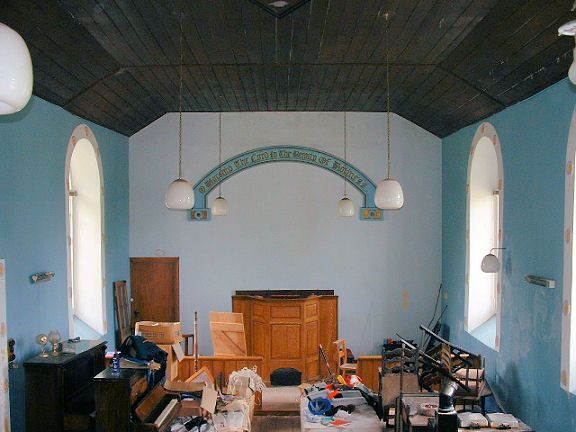 Location: Reached from the B4319 via a small lane skirting the E side of Merrion Camp.

Thorne Calvinistic Methodist chapel, inscribed 'Thorne C M Chapel / 1813-1947' in the rendered finish of the W gable. One of many chapels set up in the wake of the first ordination of Calvinistic Methodist ministers in 1811. Said to have been enlarged (referring perhaps to the number of pews) in a period of revival at the time of the Rev. David Evans' pastorate, 1859-70.

Range of three windows towards the road (SW). Two windows and a central entrance on the NE elevation, with a later porch. Pebble-dashed but with smooth render to the plinth and the surrounds of the windows, embellished in imitation of stonework. Slate roof. Evidently the external appearance dates from a 1947 restoration.

Single-deck pulpit at SE, with communion rails and elders' benches. Painted inscription on the wall over the pulpit in large letters, on an arched and stilted band of late C19 appearance. Four rows of pews on the level part of the floor. Eight rows of pews of a later type on raking staging rising to the back of the room. Boarded ceiling and floor. Plain glass fixed windows of 20 panes with semicircular fanlights above. Plastered bands raised with flowerhead motifs around windows.

Listed for historic value as an early chapel of the Calvinistic Methodist sect, less common in English-speaking areas of the Principality, and also for interior.