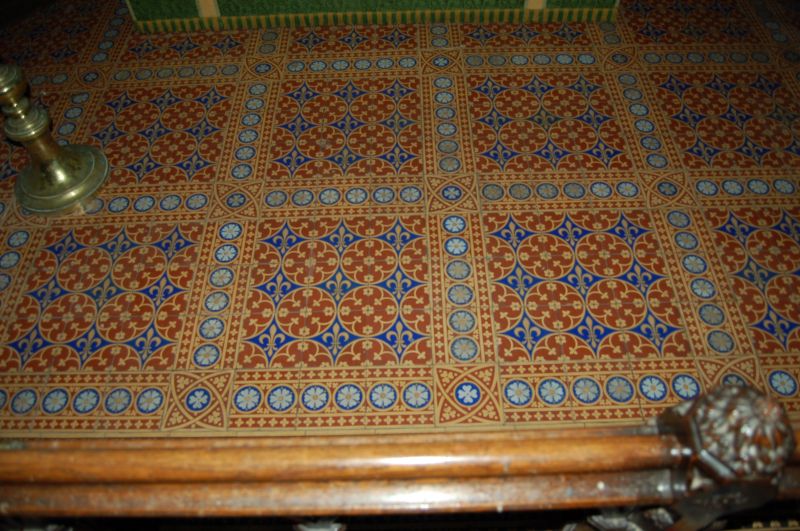 Location: In the hamlet of Cheriton, 1 km N of Stackpole village.

A slight sketch in Sir George Gilbert Scott's notebook indicates a chancel arch of the C12 or earlier, which was removed without further record in the restoration of 1851. St Elidyr's was the home church of the Cawdors, and believed to be the only one on their estate for the restoration of which Scott was professionally engaged.

Plan: Built on a site partly excavated into a steeply S facing slope, the church consists of a chancel approx. 6.5 m long by 4.5 m wide and a nave approx. 17 m long by 6 m wide, with N and S transepts, a lean-to vestry N of the chancel, a chapel known as the Lort Chapel S of the chancel, and an open S porch. At the extremity of the N transept is the tower, sited to take advantage of the higher ground. A crypt beneath the chancel is now filled in, but its external access is marked by slabs with lifting rings at the NE corner of the chancel.

The tower is of typical local form with a parapet carried on corbels and a stairs-turret at its NW corner. It lacks the usual crenellations, and it is of unusually slender proportions. Its ground storey has a pointed vault open to the N transept. There are two upper floors and a roof, all in crudely constructed vaulting on squinches. The ground, first and second storeys have windows or louvred openings facing N, that in the first storey now blocked. The top storey has louvred belfry openings on all four sides, of lancet form. There is a small first floor louvred opening facing E and slit lights to the spiral stairs. All in limestone masonry in large courses.

Restoration: The nave and porch were rebuilt, and most of the remainder of the church refaced, by Sir George Gilbert Scott in 1851 at the expense of the .;first Earl Cawdor. This was the first of the six churches on the Stackpole estate to be restored. The new exterior masonry is in snecked sandstone, the stone (Cambrian) imported from the St. David's area. Dressings are in Carboniferous sandstone. A remnant of the older sandstone exterior masonry (Old Red Sandstone, quarried locally) is still to be seen at the W side of the N transept. Rafters exposed at verges and sprocketted at eaves. Slate roofing throughout in diminishing courses with tile ridges. A small wrought-iron finial cross at the E end. Main windows restored in Decorated style.

The porch rebuilt by Scott has a large open two-order exterior arch facing S with the inner order carried on corbels with rounded and moulded caps. The doorway to the nave has an equilateral arch with a dripstone terminating in male and female heads.

Monuments: Numerous important monuments, including a C5/C6 inscribed pillar laid flat beneath the E window of the Lort Chapel. Two C14 female effigies on the floor of the Lort Chapel. A male and a female effigy one each side of the chancel. Jacobean monument to Roger Lort, d.l613, and his wife Abertha: Ionic columns and entablature with obelisk finials and a crest displaying their arms. Each figure in an arched frame with guilloched pilasters. Italian Baroque marble monument to Hester Lort, d.l647 and Sir John Lort, d.1672. Also many Cawdor monuments and hatchments. The stained glass window of the S transept (by O'Connor, 1862) depicts John Frederick, first Earl Cawdor, as King Solomon supervising the building of the Temple, in compliment for his restoration work.

The N and S transepts have mediaeval pointed vaults of the local type. That of the S transept opens directly to the nave, but that of the N transept is at a higher level and is behind a nave wall arch. Timber roofs from the C19 restoration in nave and chancel, with a soffit form echoing the traditional local vault shape. In the Lort chapel is a vault on crudely formed ribs, with its ridge running in the unexpected N-S direction. A wide and high two-order chancel arch replaces a low and narrow one. At the E~ end of the S wall of the nave is a high window related to the rood position indicated by a surviving corbel. Very large squints connect each transept with the chancel.

Minton tile paving and reredos in the chancel. In the floor the arms of Lord Cawdor are displayed (Cawdor impaling Thynne, as displayed in all Lord Cawdor's subsequent church restorations.) Oak altar table. Oak communion rails of a light and open design.