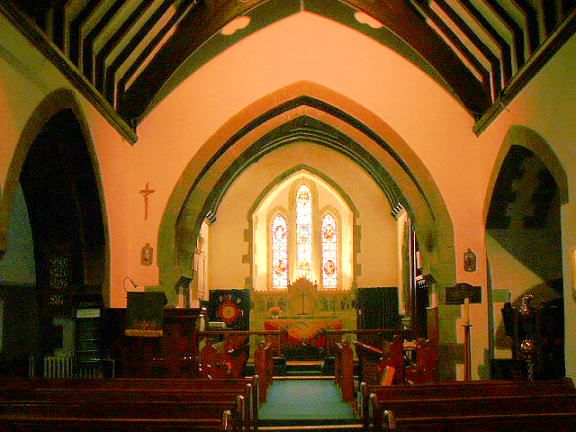 Location: In the centre of the village of Jeffreyston. The churchyard is circular with late C19 extensions N and E. There is a preaching cross (separately listed) to the S side and a small free-standing mortuar

The circular churchyard at Jeffreyston indicates an ancient foundation. This is supported by the survival of the C8 or C9 carved stone preserved in the porch. The font is Norman, but no dateable features remain to suggest the present building is so early. In the main C19 restoration the church apart from the tower was virtually rebuilt, but early fabric may survive in the vaults of the two S chapels and the perhaps C12/C13 outer arch of the porch. The surviving passage-squint indicates the existence of a N transept lost in the restoration. It is mentioned in 1291 as Ecclesia de Villa Galfri, and at this time belonged to Pembroke Priory. In the 1330s the church was granted to St. David's, and united with St. Issells because of its "poverty". By 1534 this union had been dissolved. In this period poverty did not preclude the addition of a fine tower.

On the eve of the main 1868 restoration the church was said to be in bad structural condition. At that time the N and S transepts were described as low and insignificant and their openings to the nave as mis-shapen arches. The S side of the nave lacked windows. There was a gallery which it was decided to remove. On the 24 July 1867 the Chapter of St. David's consented to a restoration. This was during the incumbency of the Rev. J. D. Palmour, whose appointment was due to the support of the Rev. James Allen, Dean of St. David's and Rector of Castlemartin (and a cousin of the Allens of Cresselly); the latter paid the cost of the new arcade to the N aisle. The architect, Mr J. Talbot Bury of Welbeck St, London, estimated a rebuilding cost of £800, to which the ICBS granted £30 with respect to the 50 additional sittings to be achieved. The architect deemed only the tower and parts of the existing walls to be preservable. All the roofs apart from vaults were renewed, the N side of the church enlarged, and all the windows renewed. The contractor was John Davies of Haverfordwest. The church was re-opened on 10 November 1868.

The organ was acquired in 1908 with a donation by Andrew Carnegie's Trust. The Bath-stone reredos is also of the early C20 and the clock was donated by H S Allen of Cresselly in 1911.

The living is now united with Loveston, Reynalton and East Williamston.

Nave and chancel with N aisle, passage-squint and vestry; double S chapels and porch, heavily restored in 1868. Masonry of hammer-dressed sandstone, much of it ribbon-pointed; the N elevation and the W elevation of the aisle rendered. The C19 masonry of the N of the church is of poorer stone. Selected larger stones for the quoins of the porch. Slate roof with grey tile ridge, the nave and chancel in one. Coped gables with finial crosses over the chancel and porch.

At the W a late mediaeval three-storey tower of uncoursed sandstone with selected larger stones at the quoins, also ribbon-pointed. There is a corbel table carrying a parapet with crenellations. All four faces have belfry lights, with clock-faces. Blocked opening to the storey beneath the belfry. The tower tapers somewhat and at the foot it is battered and rendered. The stairs turret is at the NE of the tower; it reduces slightly at mid-height, lacks crenellations and is lit by slit windows.

The windows are C19 grouped lancets, except to the vestry and the passage squint. Forest of Dean stone is used for the new windows of the restoration. Where not beneath eaves the windows have relieving arches. The archway to the porch is a C13 or C14 two-order arch with a C19 relieving arch above it. The original arch is wide and formed of two stones. There is a C19 external doorway to the vestry with limestone dressings.

A stone at the junction of the copings of the two S chapels carried the carved date 1868.

The interior effect is rich with a ponderous architectural restoration style, good proportions, a large organ and a chancel well-filled with good-quality monuments. On the axis of the church are tower base, nave and chancel. There are two small chapels to the S, the E one now occupied by the organ. The N aisle functions with the nave, but has a N return as a quasi-transept. From the aisle there is a large passage-squint connecting to the chancel, and to the E of that a small vestry. The two S chapels, the porch and the tower base are vaulted, otherwise the church has C19 roofs.

The nave has braced collar-beam trusses with quatrefoil piercings. Two-light S window. The pulpit is at the left and there are three blocks of pews occupying the nave and N aisle. The arcade at left is accurately copied from Castlemartin Church, with two-order arches, the inner bearing on very heavy abaci on thin round columns with conical caps (but with plain corbels in place of the face-corbels which at Castlemartin carry the outer order of the arches). The base of the tower is a steep pointed stone vault and opens fully into the nave, apart from a low screen. The N aisle roof is of common rafters with collars, and turns 90 degrees to form a N gable. The passage squint contains a small N window with C20 stained glass, representing St. Christopher and St. Francis.

The chancel roof is of common rafters with collars and arch braces, giving a barrel-vault effect, contrasting with the nave roof. The floor is black and red quarry tiles. There is a step at the chancel arch and two to the sanctuary. Pine communion rails with a double gate; trefoil-pierced decorative stiffeners beneath. The altar stands forward from a carved limestone reredos, added subsequently to the main 1868 restoration, in Gothic detailing with a central shelf and aedicule for the cross with cinquefoil head and polished coloured marble colonnettes and flanking buttresses. The E window is of deteriorating stained glass, the inscription concealed by the reredos. At the S a pair of lancets. Organ, occupying the E of the two S chapels, by Peter Conacher, Huddersfield, 1908.

The porch is vaulted and has a diagonally-boarded inner door with a stoup recess at the right. Benches at E and W.

The font is a C12 square bowl, scalloped beneath, on a short round pillar with a moulded base and square pedestal.

The monuments are predominantly of the Allen family and dominate the interior. Many were re-fixed from the pre-restoration building. they include that to John Bartlett Allen d.1803 and Elizabeth d.1790, at N of chancel: sarcophagus style, white marble against black, with achievement, by William Williams, mason, of St Florence; to Gertrude, wife of J. S. Allen, d.1825, with eulogy, also at N of chancel: framed in a Regency style, with urn at top, by Henry Wood of Bristol. To the S of the chancel are a monument to J. H. Allen JP MP, d.1843, with eulogy, in a Gothic surround in high relief, and to S. P. Allen, d.1861, in a simpler Gothic style.

In the nave is a memorial in the form of a draped urn and plaque to Penelope Keates, d.1868, and William Keates, deputy inspector of hospitals at Dacca, d.1869.

Fixed to the E wall of the porch is a C8 or C9 incised stone, 1 m in length by 25 cm wide, with a four-arm cross within a circle, the downward arm slightly extended. This was found in the porch floor in 1915.

Listed as a church which retains its mediaeval tower and some mediaeval fabric in the porch and S wall; the church has undergone a good C19 restoration with retention of a fine set of family monuments.