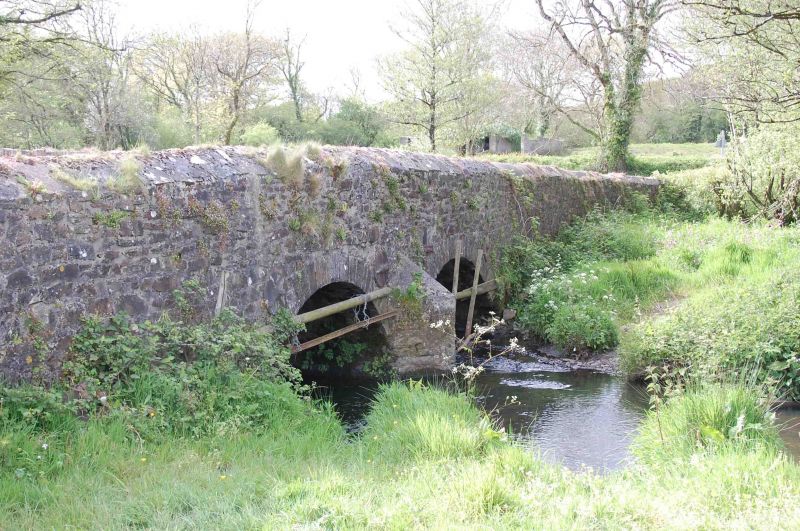 Location: At the N end of Ford Lane, 1 km N of Jeffreyston Village and 1 km SW of Reynalton Village. The bridge lies on the boundary of Kilgetty Begelly and Jeffreyston Communities.

A County bridge, built by John Evans of Cosheston, mason, in 1805. There were two previous small bridges on the same site, but although their materials were made available to the mason the bridge of 1805 was a completely new construction. The contract included the formation of a junction for a road branching to Langdon Mill. The cost, including 7 years' maintenance, was £190.

The bridge crosses two small tributaries of the Cresswell Estuary, which flows W. It is about 100 m in length. At a position between the streams it incorporates a junction with the road to Langdon. Built of local uncoursed rubble masonry; plain dressed stone in the arches, without keystones or other features. All is clearly of one build.

There are long approaches from N and S and a shorter approach from the E. The parapets splay widely in the approaches, especially at the N where the road divides for Loveston or Reynoldston. At the N of the Langdon junction there are two arches of 3 m span and S of the junction there is one similar arch. Between the two arches of the N stream there is a small cutwater on the upstream side only.

The carriageway is 3.6 m wide between the parapets. The parapets are low, with a roughly pointed coping of upright stones shedding water outwards. Bond-stones at intervals link the parapets to the mass of the masonry.

Tie-rods have been added across the bridge near to the double arch to restrain spreading but otherwise the bridge appears unaltered.

Listed as a good County bridge of 1805 by a local mason, of vernacular character, which retains its original character virtually intact.