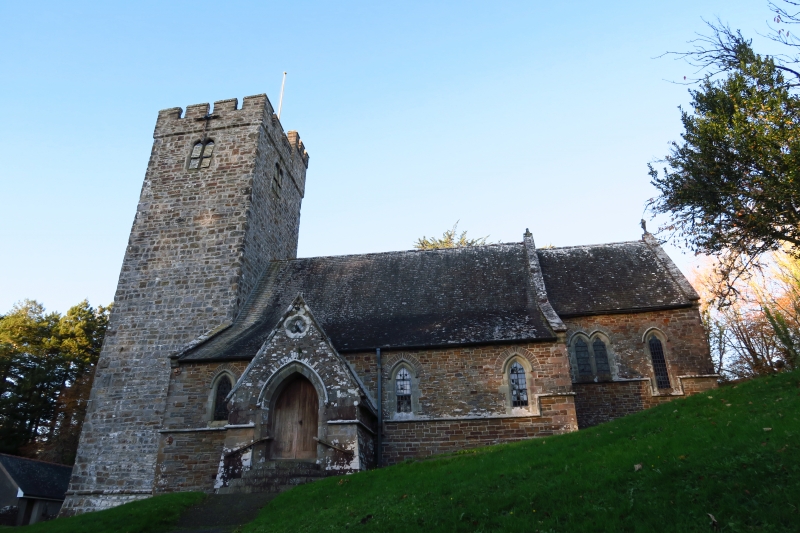 Location: 1Km N of the village of Saundersfoot. The church stands in a large undulating graveyard through which a stream passes.

The earliest surviving architectural feature is the pointed chancel arch of the C13. The N arcade may be equally old. The tower is probably of the C14 or C15.
In 1860 the Rev. James Dalton made an appeal for sufficient funds for a thorough restoration. The old church was deemed 'cavernous', low and unhealthy, and structurally unsound. Its box-pews were condemned. In the 1840s and 1850s only a £2.10s. Church-rate had been spent each year on repairs. The architect advised that only the tower was fit to retain. Work commenced in 1862 and was completed two years later. £1000 was spent on the rebuilding of the whole structure E of the tower, and £300 on additional seating. The architect, J R Kempson of Hereford, retained the old layout but it appears the floor level was raised. The church was opened again on 30th August 1864. The form of the church was generally retained in the restoration, though there is conflicting evidence for the earlier form of the S aisle.
In 1910 a vestry extension was added to the N of the church, opposite to the chancel. The pews were renewed throughout. The porch doors and a flight of curved-plan steps were added in 1978 in memory of the third Lord Merthyr.

The church is built on sloping ground with a considerable rise to the N and the E. The tower is at the W end, on the lowest ground.There is a high-roofed nave with a chancel only slightly lower; a N aisle for the full lenght of nave and chancel, with a roof almost as high ; and a lean-to S aisle for the length of the nave only. Its roof is a continuation of the S slope of the nave roof at a slightly lower pitch. There is alsoa vestry wing at the N and a porch at the S.
The tower is externally the only medieval part. It is built in informally coursed gritstone. The wole of the remainder of the churchdates from the 1864 restoration or later, and is in slightly rock-faced local Carboniferous sandstone in snecked courses. The roof is in thick slates with tile ridges and gritstone gable-copings. There are also carved stone cross-finals, one missing.
Restoration work adopted an early English style fenestration generally lancet windows (some paired or stepped), and plate tracery, with label moulds and continious string course.
The tower is plain but unbuttressed, and a crenellated parapet projects slightly on a string course. The stairs turret is at the NW corner, rising higher and similarly crennellated. The tower has paired belfrey openings, with slate-covered louvres, on each face. In the W wall of the towera group of three squared-headed lights under a square label mould, given light to a former gallery, and a pointed door beneath with a square mould carried down to join the string course.

The parts remaining from the mediaeval building are the tower, the N arcade and the chancel arch. The lowest course of stones of the S arcade may also be original, but the arcade is otherwise a restoration. The arcade piers are octogonal with plain caps and pointed arches. The single arch which continues the N arcade in the chancel is a depressed pointed arch. The chancel arch has large round corner mouldings carried down through the caps.
The chancel is short and is raised by three steps at the arch and one further step to the sanctuary. The E bay of the N aisle, opposite the chancel, is also at raised level. This bay has been extended N and contains the organ and vestry. In the tower base is a flight of nine steps leading up to the nave, inserted in the 1864 restoration. There was also formerly a gallery in the tower; its corbels in the N wall and the marks of its staircase in the SW corner remain. The high altar and the altars of each aisle are all of the mid-C20, with a carved Crucifiction on the high altar reredos. The three lancets of the E window have a common rear-arch and wide reveals. The pews are modern and there is a modern steel and timber screen at the change of level of the N aisle.
Throughout the church there is a good stained glass of various dates from 1865 to 1925. The oldest is the E window of the N aisle, to E R Stephenson, 1865. A window at the S of the chancel, to the Rev. John Jones, Vicar 18888-1912, contains a representation of the restored church, held as a model inthe handsof St. Issell. The E window, to Lady Anne Lewis, contains her portrait in a corner. The E window of the S aisle or Lady Chapel is to C R Vickerman and his wife and sister in law, by Kempe and Tower, 1912.
After the Great War a new pulpit by Caroe was constructed as a memorial, incorperating the roll of honour . It is carved in Perpendicular style, with St George and the dragon. It includes a sounding-board canopy.
The font is a square bowl of oolitic limestone with a similar but slightly varied design inciised on all faces, with raised scroll features, irregularly symmetrical. There are what appear to be hhapphazardly placed stars and crescents. Its limestone pillar is probably two reused C12 orC13 column caps, each with a primitive carved "tete coupee" face on one corner.