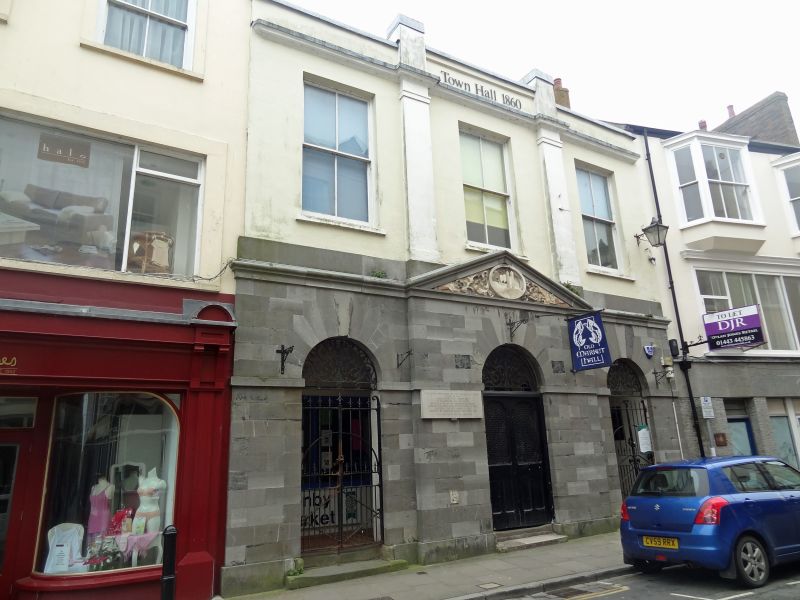 Market Hall of 1829 with Town Hall added as a first floor room in 1860-1 to designs by John Cooper. Builder Wm Davies, of Tenby. The original market was a walled open space with lean-to stalls, similar to market built by the Admiralty at Pembroke Dock in 1818. The Town Hall was built behind the 1829 facade with new first floor. Rear facade to Upper Frog Street is of 1829. In 1890 the market area was glass-roofed to designs by E Glover Thomas; other alterations made, including infilling fanlights of ground floor arches with decorative pierced cast-iron panels by Macfarlane's (Glasgow). Market roof replaced in later C20.

Town hall and market. Two storeys, 3 bays the upper storey of stucco of 1860-1, the lower of stone of 1829. Ground floor is a handsome neo-classical design in well-cut long blocks of grey limestone. Centre broken forward with pediment, sides with cornice and parapet. Three tall arched doorways with pierced cast-iron in fanlights over pair of iron gates or wood doors in each opening. In the tympanum of the pediment there is an oval plaque of a heraldic device used on the Borough Seal, flanked by carved scrolls.
Upper storey has 3 large 4-pane sashes with two pilasters flanking centre bay, with minimal entablatures, and cornices linked to a thin main cornice. Parapet in 3 bays with raised blocks over pilasters.
The rear wall of the Market, to Upper Frog Street, of 1829, has end and centre bays of tooled grey limestone slightly projecting, each with a raised string course under parapet and a round-arched doorway with stone voussoirs and impost band. Left bay has been altered as toilet entrance, the other 2 have cast iron fanlights by Macfarlane, of 1891. Iron gate to middle bay and C20 wood door to right bay. Whitewashed rubble wall (plastered in 1977) between the bays with string course and parapet continued, but on a slope due to falling ground. Dressed stone plinth. Since 1977 another grey limestone arched doorway has been added in the rubble stone wall to right of left bay, for second toilet entrance, and new market roof has been built requiring the raising of the wall over the original parapet.

Open ground floor behind the entrance arches with a staircase with iron balustrade and arrow-headed finials up to the Court Room or Old Town Hall above. Behind is the main hall of the Market, originally open, glass-roofed in 1890-1 and the roof replaced in the later C20.

Included as an early C19 market with added Town Hall of 1861, a key element in the High Street and with a good rear facade to Upper Frog Street.