Church of Saint Mary in Liberty

A Grade I Listed Building in Tenby, Pembrokeshire 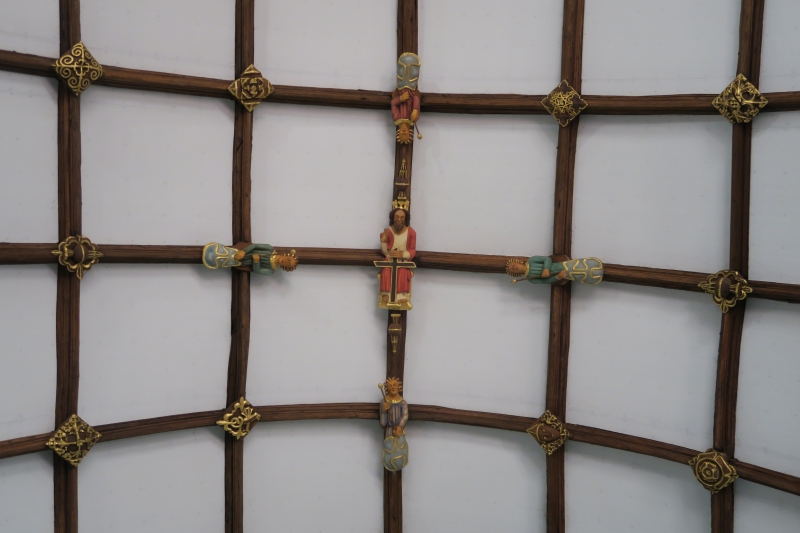 Location: In a prominent position on the SW side of the High Street just NW of Tudor Square.

Anglican parish church, mostly C15, but recorded from c1210. The early C13 church was probably a nave and chancel with narrow S aisle. In late C13 the tower on the S side of the chancel was added, the S aisle rebuilt and also the chancel. There were transeptal chapels to the N and S at about this time. Little remains visible of the C13: a lancet over the S porch, originally lighting the transeptal chapel whose gable was embedded in the wider C15 aisle, and a reset piscina in the S chancel aisle. Major rebuilding in the C15 began with the N arcade and N aisle, then a transeptal chapel W of the tower and a SE chapel alongside the chancel with 2-bay arcade. About 1450 the nave S arcade was replaced similar to the SE chapel arcade and a SW chapel built parallel with the S aisle. The chancel was rebuilt with higher walls and extended E with a sanctuary raised over an undercroft. The chancel had a loft chapel at the W end, lit by clerestorey windows, as shown from blocked beam holes and the lower part of an upper door visible in the S aisle. This explains the height of the chancel and the lowness of the later N chancel aisle. The chancel roof is dated to c1470. This was followed by the re-roofing of the nave, the removal of the chancel arch, and the enlargement of the S aisle such that a new S wall encompassed the 3 added S chapels. The NE chapel was added c1480 with 3 arches to the chancel and one to the N aisle. At the end of the C15 the broach spire was added and also the S porch and a W porch (removed in 1831). A datestone of 1496 in the SE chapel probably comes from the W porch. and also refers to the college, the ruin of a chantry in the churchyard, that must be of similar date as the details match the W door. Post Reformation features include the pulpit dated 1634 and some rebuilding of the S porch parapet in the C18 with sundial dated 1726. Some earlier C19 work, including re-roofing of N aisle in 1846-8 and restoring of 2 S windows.
Major restoration 1855-69 by David Brandon, begun in 1855-6 with chancel roof repairs, new E window with glass by Wailes, and fittings including rails and reredos (since removed). The S aisle windows were replaced in 1859 and the SE chapel restored with new windows in 1860. Window over the S door 1861. In 1862-3 the N porch was added and the N aisle windows replaced. From 1863-5 dates the restoration of the nave roof, further windows and new pews. In 1866-7 the churchyard was railed. In 1869 the organ was moved from the W gallery to under the tower, to allow for a new W window with glass by Clayton & Bell.
In 1882-4 under J P Seddon the SE vestry with sacristy below was rebuilt with new E gable and the NE chapel E end remodelled to match. In 1887 three W end galleries were removed, and a new font by F A Walters given. In 1888 the bells were restored and the tower clock installed. In 1892 an oak choir screen by A P Dawson was installed (moved to NE chapel 1908). In 1894 the NE chapel E window by W G Taylor was inserted and in 1899 a new altar below it (since removed). In 1903 choir stalls by E H Lingen Barker were installed, the 5 clerestorey windows reopened, and a brass rail and oak steps added to the 1897 brass lectern. In 1904 houses obscuring the E end were removed. In 1905 the rood loft stair was found in the tower, and a small window was reopened over the S door. In 1906 the old font was replaced in the SE chapel. In 1907 new altar rails (? now in NE chapel), in 1909 the chancel N window reopened, by J D Coleridge, with glass by Karl Parsons. Further altar steps and rails given in 1912 (also since gone). 1920 SW window war memorial stained glass by Kempe & Co. and c1920 fine N aisle window by Karl Parsons. In the 1960s much work by Alban Caroe including the rebuilding of the spire top, liming of the previously stained oak fittings, the replacement of matchboard panels in the chancel roof, gilding and decoration of the roofs.

Graded I as an outstanding late medieval church with exceptional roofs and monuments.