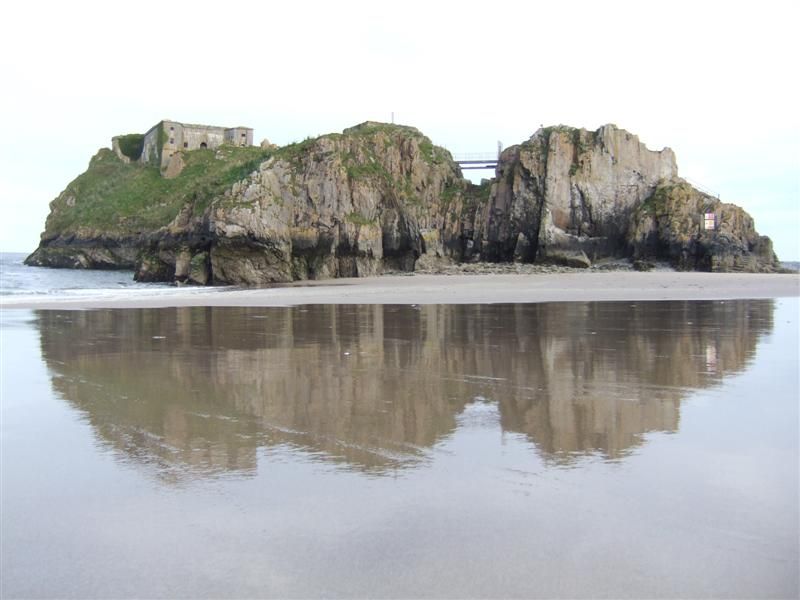 Location: Situated in a prominent position on Saint Catherine's Island to the E of the town and SE of Castle Hill.

Fort of 1868-70, for the defence of Milford Haven, one of the series of 'Palmerston Forts' built to secure the naval harbours at Milford, Portsmouth, Chatham and Plymouth from seaborne attack. The perceived threat was from France under Napoleon III, particularly after the 1858 launch of La Gloire, the first iron-clad ocean-going warship. The first proposals of 1858 were for 5 forts on the Haven itself (to add to 3 already there), but by 1860 it was noted that the Haven was open to attack overland and a further 11 forts in 2 lines, one N and one E of the waterway were planned together with 5 single forts to defend possible landing beaches. Only one inland fort, Scoveston, and one beach fort, St Catherine's, were built. The design of this fort is said to be by Colonel Jervois RE. The fort was designed to resist SBML (smooth-bore muzzle-loading) guns but was overtaken by the development of rifled muzzle-loading (RML) guns. The forts were generally gun batteries armed with a mixture of SBML and RML guns, with the guns either on open-air platforms at the elevated sites or within brick vaulted chambers or casemates at lower sites. It became a private house in the earlier C20, owned by Mrs Windsor Richards, noted for the lavish and exotic interiors.

Marine fort, of rock-faced limestone with tooled limestone dressings and some granite. Aligned NW to SE with 2-storey and basement entrance end at NW, centre with 3 large square gun openings in granite-faced walling each side, and SE end trilobe bastion, an open-air gun platform. Big rounded cornice all around with low parapet. Similar rounded moulding over basement at entrance end. Entrance is across dry moat originally with drawbridge to rusticated arched entry with outsize radiating voussoirs, plaque above and corbelling under cornice. Ground floor square-headed gun-opening each side, in angle to projecting square bastions. These have similar openings to basement and ground floor and small cambered headed window to first floor, while side walls have 3 square recessed small gunports on each of the three levels, commanding the dry moat. The side walls are granite faced at lower level with curved jambs and massive voussoirs to the gun openings, now glazed, and there is grey stone walling above. The end bastions are low, as built into the rising rock.

Not inspected, said to be much damaged.