A Grade I Listed Building in Pembroke, Pembrokeshire 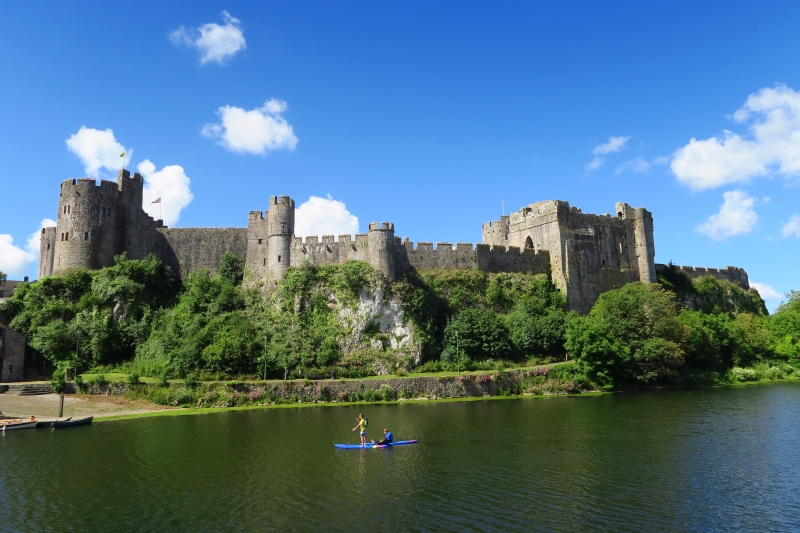 Location: Situated prominently at the high W end of the ridge on which the old town of Pembroke is built.

Major Anglo-Norman castle, mostly late C12 to early C13. Pembroke was taken by Roger de Montgomery in 1094, and the first castle is said to have have been first built by his son Arnulph in the reign of Henry I, i.e. after 1100, but the site was besieged in 1094 and 1096 which suggests that the castle was begun at once. Arnulph was removed in 1102, and in 1105 Gerald de Windsor was appointed Royal Steward. The Earldom and County Palatine of Pembroke was created in 1138 with Gilbert de Clare as first Earl, succeeded in 1148 by his son Richard Strongbow, conqueror of Ireland. Henry II stopped at Pembroke on his way to and from Ireland, 1171-2. Strongbow's heiress married William Marshal, and he and his sons held the earldom 1189-1245, during which time the greater part of the castle was built. William Marshal is said not to have visited the county until 1204, but to have built a large part of the castle before his death in 1219. It is not certain how much had been built already in stone by the de Clares, possibly the Norman Hall, probably nothing of the structure that survives now. William Marshal was followed successively by his sons William II (died 1231), Richard (murdered 1234), Gilbert (died 1241) and Walter (died 1245) before passing to his daughter Joan, married to Warine de Munchensy. Much of the inner castle was built during this period: the Great Keep and walls of the inner ward in William Marshal's time, the rest of the Inner Ward under his sons, the Northern Hall perhaps in Joan's time. Joan, daughter of Joan and Warine, married William de Valence, half-brother of Henry III, who took over his wife's estates in 1265, and was earl to his death in 1296. From his time probably dates the walling of the outer ward, and the Great Gatehouse. Joan died in 1307, her son Aylmer de Valence died in 1324 and the earldom then passed to his nephew Laurence Hastings. During the C14 the earls were largely absent and the castle declined, though repaired when attack was feared from France in 1377 and 1405. Passed in 1335 to John Hastings, died 1375, and to John's son John, an infant. When John II died in 1389 aged 18 the earldom reverted to the crown: held by John son of Henry IV and from 1414 by Humphrey Duke of Gloucester, died in prison 1447. In 1453 Jasper Tudor, half-brother of Henry VI was made earl. Jasper's nephew, the future Henry VII, was born at Pembroke in 1456 and brought up there to 1471. During the Yorkist period William Herbert was made earl in 1461, beheaded 1469. Jasper Tudor recovered his earldom in 1485 and it reverted to Henry VII on Jasper's death.
The castle was unroofed by 1600 but repaired and played a prominent role in the Civil Wars 1642-9. Held for Parliament in the first Civil War 1642-6, the Parliamentary commanders, Laugharne and Poyer, declared for the king in 1648. The castle was besieged by Oliver Cromwell and surrendered 11/7/1648. Then partly dismantled, it remained ruinous until a partial restoration for J R Cobb in 1880-83. The full restoration began in 1928 when Major-General Sir Ivor Philipps of Cosheston Hall bought the ruins.

Outer and inner wards with curtain walls with towers of coursed rubble, though most of the inner ward landward curtain wall and horseshoe gate have gone.
The outer ward is entered by the Barbican Gate, recreated in the 1880s, the Great Gatehouse, mid C13, was also restored in the 1880s. Flanking round towers, the Bygate Tower to left, the front wall rebuilt in 1934 and the Barbican Tower to the right, blown up in 1648-9 and restored in 1930. The outer ward walls running W are the most rebuilt in the earlier C20: the first stretch was thickened in the C17 and all the towers slighted after 1648. The Henry VII Tower rebuilt 1929 is the supposed birthplace of Henry VII, where Leland in the C16 saw a commemorative fireplace with the Tudor arms. Steps in front rebuilt 1929. The Westgate Tower was rebuilt 1929-31. The next stretch is much less rebuilt, with the Monkton Tower and a postern gate, the wall then running N to the W corner of the inner ward. On the other side of the Gatehouse the wall runs N to the Northgate Tower, restored in 1934, turns W over the Mill Pond to St. Anne's Bastion. This projection is probably late C13, comprises a long narrow platform with turret each end and postern gate to the S. A building here in ruins was restored in 1929, and turned to a small residence in 1933.
The inner ward has mostly lost its wall to the outer ward, footings remain of the D-plan early C13 Inner Gate, to left, the Dungeon Tower to right is a mid to later C13 addition, with a latrine turret added on the right. The Great Keep is a massive circular tower built c. 1204, the finest in Britain, with domed vault. Restored in 1928-30. The Norman Hall to the NE may be late C12, restored 1933. Walls of a first-floor hall over an unvaulted basement. Solar block off to one side, C13 altered C15. Great Hall of c. 1300 parallel on the other, from which a rock-cut stair descends to the Wogan Cavern below. The great hall was on the first floor, the basement not vaulted and has fine traceried windows, similar to Monkton Priory. At the end a small chamber and latrine turret. Between the Keep and Norman Hall, remains of a single-storey building, the Chancery, possibly C14. Against the W corner of the inner ward, narrow vaulted chamber, C13 or C14, called the Western Hall, the parallel remains have been identified without clear evidence as the chapel. The cliff edge curtain wall is early C13 with square N turret.
The Wogan Cavern below has a front wall with some herringbone masonry, uncertain date.

Graded I as one of the outstanding medieval castles of Britain. Scheduled Ancient Monument PE005 (PEM).