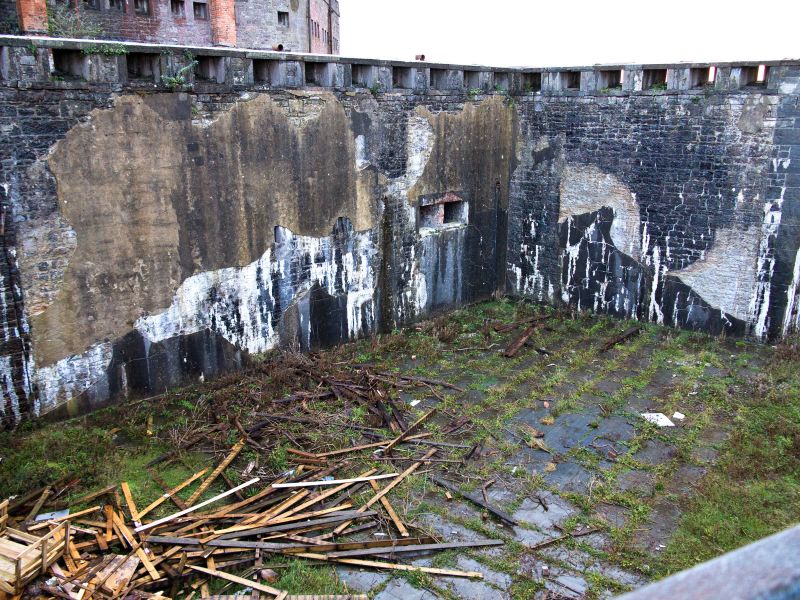 Location: Situated on the crest of Treowen or Barrack Hill, some 300m S of, and overlooking the Royal Dockyard.

The superintendent engineer was Captain Farris RE, the contractor Thomas Jackson of Pimlico, work commenced 6/9/1841 and was completed 12/1/1846 to a cost of ú39,323/9/8.25d. Built to house the Royal Marines, in 1882 it become HQ of 9th Welsh Garrison Artillery Brigade. 1899 HQ Pembroke Fortress, 1914-18 HQ No 26 Pembs Fire Command, October 1914 became Siege Training School, 1926 HQ Coast Defences Welsh Ports. During World War Two 17 men were accidentally killed in a explosion. Post-1945 use for training Territorial artillery, and eventually sold to South Pembrokeshire Council as council store, and since sold again. S range rented as golf club house.One of the most unusual barrack buildings in Britain, probably the last example of a 'square bastion trace' fortification built in Europe. The form of the design dates back to C16 Italy, though Fort Worth, USA, of 1861 is later. The design was a compromise between the need to accommodate troops and the need to fortify the hill. It is doubtful whether the buildings achieved the latter adequately, as the buildings would not have resisted bombardment.

1841-6 defensible barracks, built to house officers and men of the Royal Marines, and, to a limited extent, to provide landward defence for the Royal Dockyard.

The centre of the platform is a 140 foot (42.67m) square parade enclosed by barrack blocks, entered via a projecting N gatehouse. Coursed rubble stone with ashlar dressings, band, parapet and hipped slate roofs with red brick chimneys. The gatehouse has a pedimented ashlar front, five musketry loopholes over a sill band and moulded cambered arched gateway with datestone 'VE 1844' over and two flanking loopholes. Wall breaks back each side with loophole each floor. Winches for the former sliding drawbridge are in the rooms each side of the entry. The flank walls of the gatehouse are loopholed on both floors and return to the N side of the barracks. The barracks are four two-storey ranges with basements around the central square, the corners chamfered for access passageways to the bastions through tall cambered archways with double wooden doors. The external elevations were originally pierced with 419 ashlar square musketry loops (the number since reduced by the insertion of some sash windows), in two floors and arranged in groups. There is a central projecting square block to the W, E and S sides with sash windows to the front and loops to the sides, the E block carrying an iron water tank. The chamfered corners have steps down to basement stores each side of the gateways, four loops each side at ground floor and eleven at first floor. The N external wall has contemporary brick additions (marked on 1862 plan), to the W of the gatehouse with flat concrete roof, to the E with hipped slate roof, a former detention room and cell block. A small structure to the E was a fire-engine shed. Later C19 additions on the S wall, a 5-bay lean-to timber gun shed, a gabled billiard room and latrine. The W wall formerly had a lean-to timber 'skidding shed'.

W and E sides match, 5-3-5 bays with centre doorway, the N side is of 5-2-1-2-5 bays, the centre having the main gateway with sash above and pediment with clock. The doorways are in the centres of the two 5-bay sections. The S side is of 5-9-5 bays, the centre slightly recessed, one doorway in each of the outer sections and three in the 9-bay centre, each alternate doorway with a later timber shallow-pedimented porch. All the doorways have shallow-gabled flush ashlar surrounds.

East and west ranges were full-depth barrack rooms with timber floors on slotted cast-iron joists and beams. Ashlar centre stairs with iron balustrades rising from basement to first floor. Slop bucket recesses next to the barrack-room doors. Timber king-post roof trusses. S section of E range converted c1985 to small hotel rooms. W range has a dumb-waiter set in a partition wall rising from the basement bakery. In the basements of the projecting centre blocks were cartridge magazines with brick cavity walls. Adjacent lighting passage, permitting light through a glass-sealed recess, to avoid fire in the magazines. The W magazine has copper-faced shifting lobby doors still with WO form 949 'Standing orders for artillery magazines' attached. The S range had officers quarters in the centre, ante-room and mess to the E, the N range had soldiers mess, bar and tap and married quarters. The basement rooms reached by the external stairs in the chamfered angles were stores, laundry, latrines and magazines. The NE powder magazine in the E curtain has two barrel-vaulted chambers entered by a metal-clad door and wooden gate, the outer chamber divided by a wooden partition was a 'filled shell store', the inner chamber is entered by a fully-equipped 'shifting lobby' and is divided into a cartridge store and larger shell store, the former with timber magazine skidding and a horizontally-sliding issue hatch, the latter with two issue hatches.