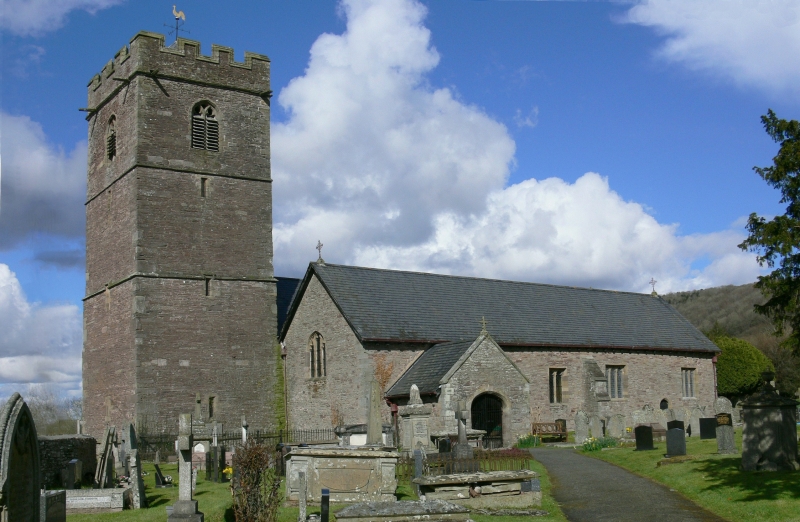 Location: Located on a small plateau above the village, at the junction of Church Street with School Street.

Talgarth was the chief royal residence of the royal house of Brycheiniog. The church was, with that of Llangors, granted to Brecon priory by Bernard of Neufmarch_ in 1093-5. Two significant events are associated with the church, the traditional burial place of St Gwendoline (Gwen frewi), the 11th daughter of Brychan, king of Brycheiniog, and the location for the conversion of Howel Harris in 1735, whose preaching in the churchyard in turn brought the famous hymnwriter, William Williams, Pantycelyn to the non-conformist persuasion. The present church building is of C13 and C14 date, restored in 1873 by Thomas Nicholson of Hereford.

S porch has 4-centred outer and inner arches with bracket mouldings. Ribbed stoup and a blocked image recess over the inner door. Nave has cusped 2-light 'Y'-tracery windows, and blocked C16 square-headed door with animal and knot in spandrels. E window 3-light with panel tracery and similar E window to S chapel. Aisle is divided from chapel only by a buttress, and has one window as nave and 2 and 3-light later C15 square headed windows with cusping. W tower is C15, of 3 stages, very small openings but 'Y'-tracery bell openings and crenellated parapet.

Interior: Nave has late C14 4-bay arcade to S aisle; arches of 2 chamfered orders on octagonal columns. Walls plastered. Trussed rafter roof with soffit boarding, all C19, with large twisted tie bars. Chancel arch is carried on stilted and brattished corbels of large heads of bishop and king. Chancel is raised over 2 steps, rising a further 3 steps to the altar position, all encaustic tiled. Roof boarded and panelled. Wide C14 arch to S aisle, and C19 squint to organ chamber. Roof continuous from aisle to E chapel. Tower has 6 bells, all of 1724, by Rudhall.

Fittings: Font, by S door, C19 limestone, arcaded and moulded bowl on octagonal shaft with quatrefoils. Step connects base to wall. Lady Chapel at W end has parts of a fine late medieval
screen, the cornice carved with undercut oak and vineleaf trail. Other fittings of oak in chancel, early C20 but pews C19 pine. One hatchment in Nave of Gwynne family of Trefeca Fawr, with motto VIMVI REPELLERE LICET. Light fittings by George Pace.

Listed II* as having good quality medieval work, and for its historical associations, particularly with the early Methodists.