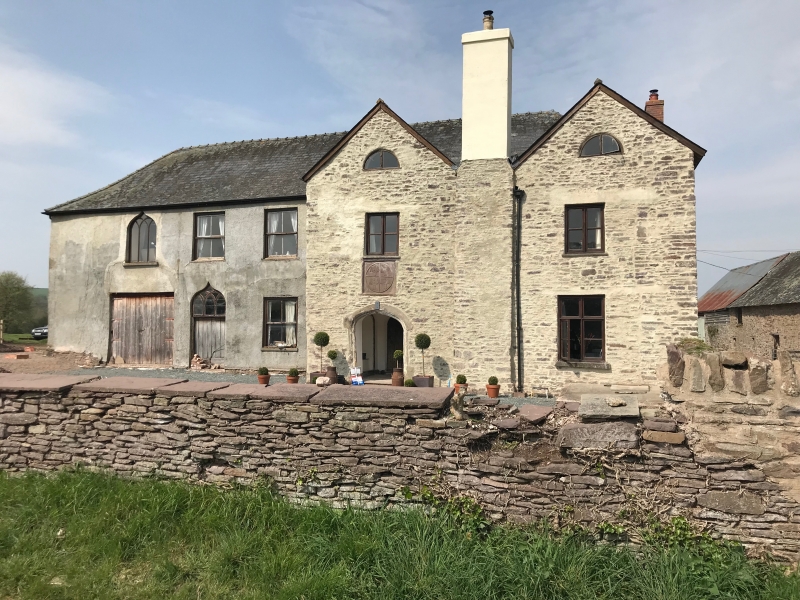 Location: Located outside and beyond the N end of the hamlet of Trefeca, on the W side of the road and behind a walled front garden.

Built originally in 1576, and leased to the Countess of Huntingdon in 1764 to establish a training college for dissenting protestantism, the college opening in 1768, at the inauguration of which George Whitefield preached. Closed down when lease expired in 1791/8, and the college moved to Cheshunt, the building then reverting to a farmhouse. Whitefield broke away to found the Calvanistic Methodists in or before 1741, although the Countess remained faithful to the original austere approach.

The Countess was a niece of Lady Fanny Shirley of Twickenham, a friend of Horace Walpole, and would seemingly be acquainted with the more archaeologically correct form of the gothic style promoted by him through William Robinson at Strawberry Hill. Haslam suggests that the gothic style is directly connected with that of Lady Huntingdon's Chapel at Bath of 1765 and indeed of her own house, and may be by the same unidentified architect. The style is more correctly gothic than Harris's work of 12 years earlier, although has still not departed far from symmetry.

Large farmhouse of the late C16, much altered in the mid C18. Rubble sandstone, with slate roofs, hipped at the S end. Two storeys, with a 2-storey and attic cross wing at the N end, and a matching 2-storey and attic porch set in the angle. Large C18 wing to the rear. The porch has an open-fronted moulded Tudor arch, with a door into the cross wing, and the main door to the house, counter-boarded and studded within a bracket-moulded stone doorcase. Porch altered in C18 when the small window to the S blocked and replaced by a seated alcove, and the ceiling given a plaster dome. Stone tiled floor. Inset above the door, a sandstone slab with moulded margin and 4 angels displaying shields in the four quadrants of a circle. Recorded as having the inscribed date 1576. The first floor chamber has a C20 two-light window, and a lunette in the gable.

The N cross wing, probably originally parlour with kitchen to rear, has C20 transomed timber windows, and a lunette window in the gable, matching that of the porch. A stone stack in the front corner of the room projects slightly, making the gable off-centre.
The main range is stuccoed, formerly with Gothick ogee headed windows, now with 4-light C19 sashes, although two have been replaced with 3-light ogee-headed windows with intersecting tracery reflecting the original C18 form. A large forced vehicle opening to the former hall on the ground floor of the end bay. The end elevation has similar replica windows. To the rear, the cross-passage door, now a C20 replacement, and immediately N, a low round-headed door with giant rounded lintel stones. Above the door, a 3 x 5 light high C17 window. Against the rear wing, triple ogee window, and a single one above, with the intersecting glazing bars replaced. A similar triple window survives further S beyond the rear wing. Rear service wing, of 1768-72, has 5 and 6-light reset transomed windows, mostly blocked.

Cross passage from front door, with hall, later the college Chapel, beyond screen to the left, and parlours to right. Stack on rear wall, with fireplace and oven to kitchen in rear wing. Stair to upper floor. Cellar under front parlour.

Included at Grade II* for the survival of early fabric, and for the importance of the Countess of Huntingdon's College to the history of non-conformity in Wales.