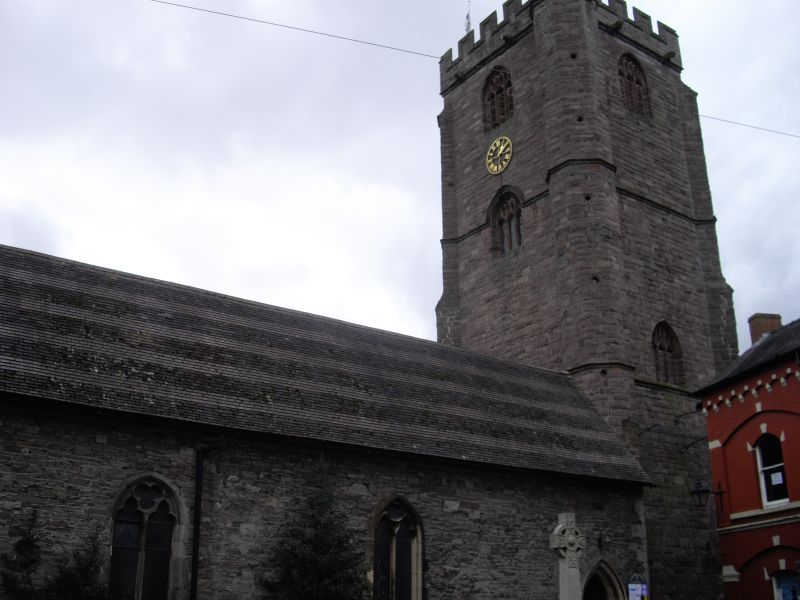 The building was a chapel of ease to the Benedictine Priory, and became the parish church only in 1923 when the Priory was elevated to cathedral status. A scalloped capital in the nave indicates C12 origins. Extensions and enlargements continued until the C14. The S porch is of late C15 date. In the early C16, Edward Stafford, Duke of Buckingham paid for the tower (cost £2000). The "Buildings of Wales" calls the tower "the finest in Powys", and remarks on its stylistic links to the Perpendicular towers of Somerset. There were repairs to the church in 1805, and 1831. In 1856/57, TH Wyatt carried out a restoration. In 1889 a new entrance was made from the High Street. From 1928, WD Caroe provided fixtures and fittings.

South porch has its C15 roof with arch-braces and quatrefoil ceiling. The church has mid C19 open-truss wagon roofs. Exposed stone walls. Nave and chancel in one, and aisles with arches of varied sizes and periods. One circular pier in N arcade has large scalloped C12 capital. Piscina in S aisle. Early C15 octagonal stoup with clustered shafts. Late C14 altar on W pilaster of S arcade. Near entrance from High Street, a coffin lid with foliate cross.