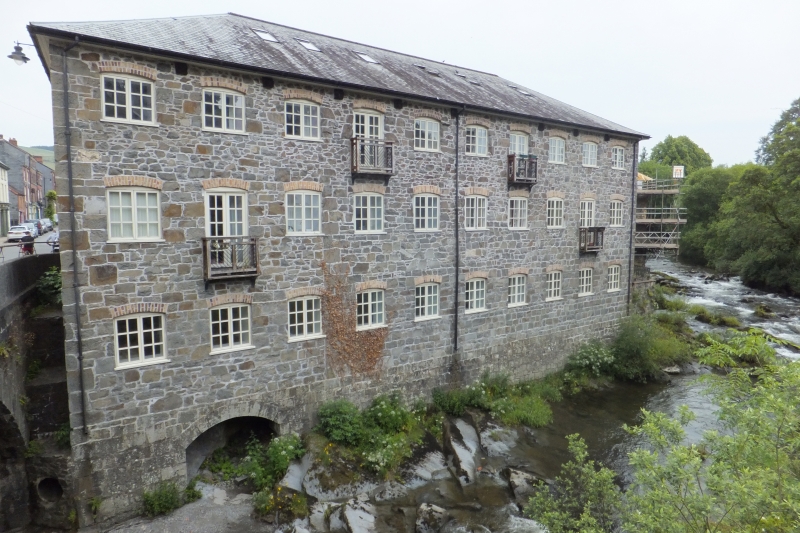 Location: At the end of the street on the E bank of the River Severn; besides the Short Bridge.

Formerly known as the Town Factory and later as the Bridgend Flannel Mill.

Built 1834 by Mrs Cole of Glanclywedog on the site of an c18 factory; mid C19 alterations. By 1908 it was run by William Morris and Sons. Major fire January 1937, after it was bought by two Frenchmen and converted into the Boy's Club. The last surviving nearly intact example of a substantial woollen mill in Llanidloes.

3-storeys, the lower of which is built into the bank. Rubble masonry with quoins; modern flat roof and cambered stock brick voussoirs to 9-pane hopper windows. The main elevation is that flanking the river; the lower masonry is coursed and has slightly battered base. A vertical break rising to 2nd floor level to right of the 3rd bay suggests that the mill has been extended at the down stream end and raised by one storey with simultaneous rewindowing, perhaps ca 1850 contemporary with the building of Short Bridge. At the base of this extension is a segmental headed opening with rubble voussoirs, probably a spillway. Largely collapsed rubble outbuilding at S end by weir and one brick infilled doorway at the top of main end wall.

Interior partly converted into a gym.