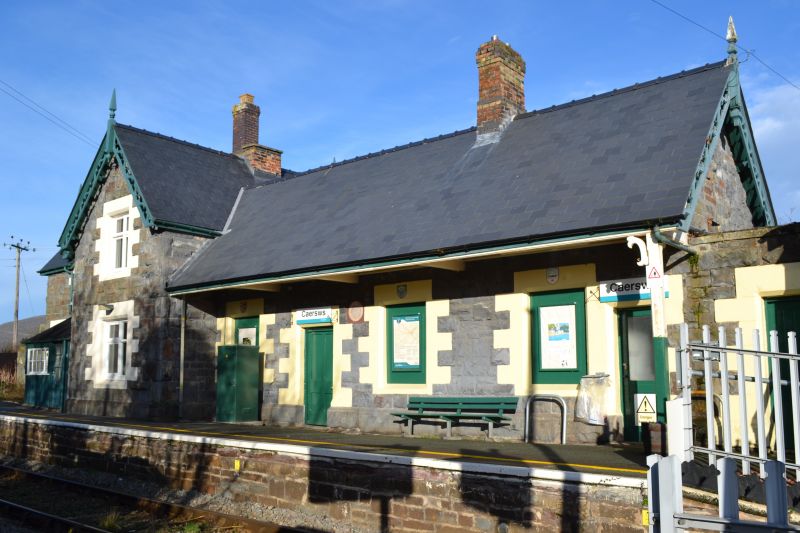 Location: The railway passes to the W of the village. The station lies immediately N of the level crossing, and is attached to the signal box.

Caersws lies on the Newtown to Machynlleth line which was constructed following the Act of 1857, and became part of the Cambrian Railway network in 1864; the Londonderry's of Machynlleth were closely involved and the contactors were David Davies and Thomas Savin. It was completed in 1862. Caersws station is an example of a rural station on this double track line, now reduced to a single track, and is dated 1864, and therefore is contemporary with the formation of the Cambrian Railway.

Single storey station with attached 2-storey stationmaster's house at the NW end behind the long platform. Snecked bullnosed rubble construction with grouted slate roof and red brick chimneys, one cut down. Ornate cusped bargeboards to gable ends and to the front gables of the house - most retain their finials and pendants. The station has a 4-bay platform front set back under a canopied roof, with cross-frame windows and entrance offset to the left (besides the missing clock face); painted architraves including coats of arms. A further doorway steps down at the extreme right end beside the narrow link between station and signal box. The front of the 'L'-plan stationmaster's house has advanced 1-window gable end and a similar gable treatment to the dormer hood over the 1st floor window, set back to the left. Lean-to boarded porch with small pane glazing is set into the angle with the cross range. Walled yard and outhouse at the left end.

There is an upper quadrant LMS pattern signal gantry approximately 250m to the S, and a GWR pattern gantry with home and distant lower-quadrant semaphores located approximately 85m to the N.

The original character is retained, including panelled partition and 4-panel door, and round-headed ticket window to the waiting room, and a an axial cast iron fire grate with surround. Ovolo-moulded stop chamfered beam over. The waiting room retains its original stout wooden armed benches.

Listed for its special interest as one of the best preserved rural stations from the early years of the Cambrian Railway, and of group value with the signal box.