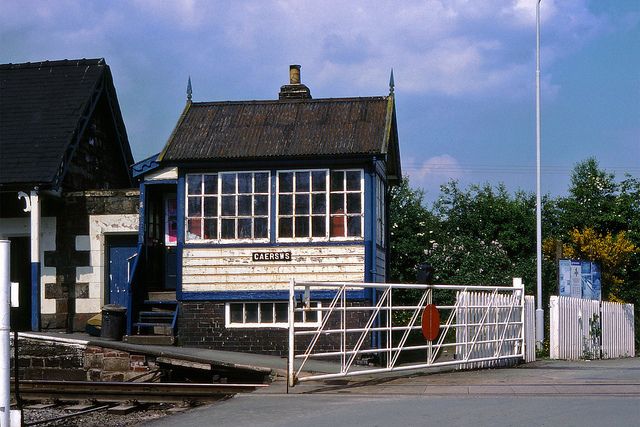 Location: Located on the W edge of Caersws village, beside the level crossing, and with attached railway station to the NW.

Caersws lies on the Newtown to Machynlleth line which was constructed following an Act of 1857, and became part of the Cambrian Railway network in 1864; the Londonderry's of Machynlleth were closely involved and the contactors were David Davies and Thomas Savin. It was completed in 1862. The signal box is a Dutton Type 1, manufactured in 1888-92. Almost all of the Cambrian Railway signal boxes of this type were erected between 1890 and 1892.

Small-scale signal box of timber construction on a low blue brick basement, originally with a slate roof, now of corrugated iron. The box is accessed by a external timber stair from the platform on the NW side, with a hooded glazed door at the head. The small-pane horizontally sliding windows continue across the front and around the SE gable end providing views up the line. Name board to the centre. Gable end bargeboards with undulating ornament and timber finials and pendants. Overhanging eaves and a red brick chimney.

There is an upper quadrant LMS pattern signal gantry approximately 250m to the S, and a GWR pattern gantry with home and distant lower-quadrant semaphores located approximately 85m to the N.

The signal box is exceptional in retaining the original Dutton 18-lever frame,of which, only four are now in operation controlling semaphore signals above and below the box, and locking the crossing gates. The token box was finally removed in 1988.

Included as an exceptionally well preserved example of a C19 signal box, one of only two of this type still operational in Britain, and of group value with Caersws Railway Station and Stationmaster's house.