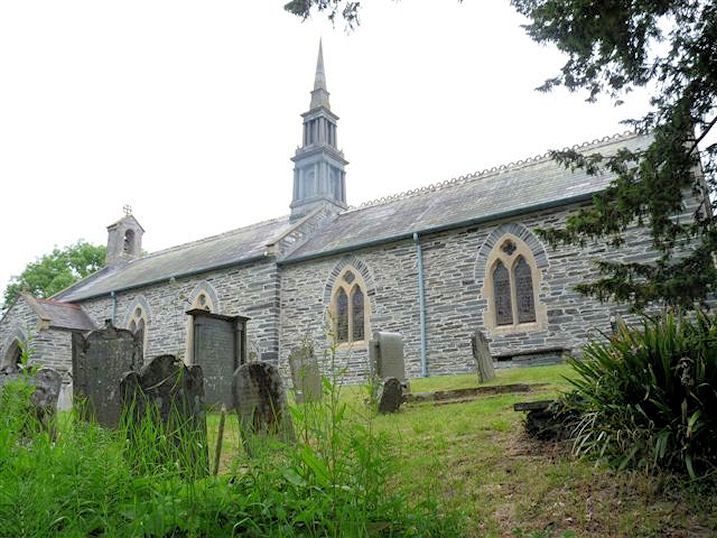 Location: Situated on lane between A484 and B4570 some 500m N of Croesllan crossroads.

1830-2 Anglican parish church by David Evans of Cardigan, remodelled 1859-60 by R J Withers, architect of London. Coursed rubble stone with Bath stone tracery, slate roofs and red crested ridges. Nave and chancel of near equal length, chancel ridge slightly lower. Ashlar plate tracery of 1859, W bellcote dated 1891, S porch probably of 1859, and fine slate classical steeple over chancel arch of 1830-2. Coped gables and renewed cross finials. Steeple (restored 1993) is exceptional, a miniature classical spire in Cilgerran stone, the columns renewed in turned slate. Three tiers, the bottom two with Roman Doric columns in antis, pedestal and entablature. The blocking course over the lowest tier serves as plinth for the next. Bottom tier has arched niches. The spirelet itself is an obelisk on plinth and panelled pedestal, the shaft four-sided with chamfered angles. Neo-Grec acroterial ornaments to each stage. Plain W bellcote with shouldered coping. Similar coping to gables and S porch, porch has tall chamfered entry and impost bands. Roll-moulded pointed door within. Nave has W 2-light, and two flush 2-light windows each side, the side windows uncusped with circles over. Chancel has two similar to S, lean-to vestry and one to N, but tracery has some simple cusping. E 3-light window with two sexfoils. All windows have Cilgerran stone voussoirs. Nave E has low sloping buttressing each side. Vestry is lean-to with acutely pointed 2-light E window, Caernarvon-arched W door and strongly modelled chimneystack, stepped-in and with gabled cap pierced by quatrefoil.

Included at II* because of the exceptional quality of the 1830 steeple and near-complete furnishings of 1859.