A Grade I Listed Building in Cynffig, Bridgend 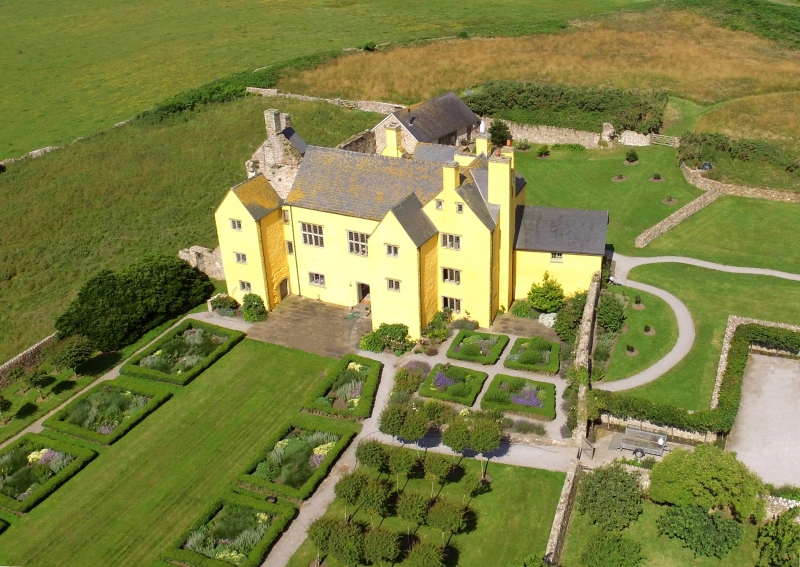 Location: Located on a limestone promontory jutting west into Swansea Bay, approximately 4.2 kilometres N of Porthcawl, and reached by a long farm road leading W from the minor road from Porthcawl to Kenfig.

The present house, built by the Turberville family, probably occupies the site of a monastic grange originally granted to Margam Abbey by Earl William in the early C12, but was transferred to Neath Abbey in an exchange of land which took place between 1173 and 1178. The house was leased by the Abbot of Neath to Richard Loughan in 1467. It was visited by Leland in 1540, and was purchased after the Dissolution by Richard Williams, in 1543. It was shortly after re-purchased by Christopher Turberville of Pen-llin, sheriff in 1550 and 1569. The present building is believed to have been begun after Jenkin Turberville came into the property in 1561, incorporating some medieval fabric. The Turbervilles, a well-known recusant family, sold to Charles Price of Badminton in 1685-7 after when it was occupied by tenants. It later descended to the Williams, tenants in the later C18, although a sale document of 1782 survives. At this time the romantic story of Elizabeth (Betsy) Williams, the Maid of Sker, allegedly took place. The property was held by the Margam Estate up to 1941.

The house comprises a long NE-SW range of late medieval to early C16 date on 2 floors, with two principal cross walls forming a near-square chamber at the S (=SW) with a gable stack, a rectangular central chamber or low hall with an original splayed window on the W, and a rectangular chamber at the N end. The plan is similar on the first floor, the central bay being the great hall with a lateral fireplace and dais screen at the upper (N) end. All openings were modified in a major remodelling of the mid-late C16, when a stair tower was added on the rear, extending to a new second storey. At this time the 3-storey front wings were added, and various extensions made at the rear. The standing fabric was not substantially altered after this date.

Built of local sandstone rubble, with ashlar detailing and slate roofs. The mid C16 remodelling provided a grand first-floor hall with dais at the N end, with 3-storey wings on the E front affording a fashionable elevation symmetrical in its main elements. Tall stone stacks. The original main entrance was probably inconspicuous, set in the SE wing as Chastelton, Oxon. The main stair was in a projection at the rear (W), serving the upper end of the hall.

The main E front has two 4-light stone mullioned and transomed windows to the first floor hall. The gabled 3-storey wings also have stone mullioned windows, diminishing from 4-light to 2-light to the second floor. An attic floor exists at the N end. Blocked doors in the re-entrant angle, that on the S with a Tudor arch. Three-light similar windows to the N outer wing, the outer face of which is set at an unexplained angle, and rises to a dramatic gable window constrained between two tall stacks. A further added lower building continues N to the garden wall. The rear has a large projecting stair tower with a roof parallel to the main range; one 2-light mullioned window with label hood. A bridge section carries the second floor to a narrow rear extension of the N range with a monopitch roof. A four-light mullioned and transomed window to the S of the stair tower lights the dais end of the hall. Further ranges to the S extend rearwards, one containing a secondary stair. The S end has collapsed, but had similar stone mullioned windows with wine-glass ogee chamfer stops. A large doorway now blocked opened to the gardens on the W side of the house. This S end of the house, of at least two builds, extends for some 18m to the E, climbing the hill, and contains one large blocked opening, and continues to the E at an angle as the front garden wall.

The interior of the building is in a very poor and dangerous condition at the time of survey, and the state accommodation on the upper floors could not be seen. The NW stair rises in short flights around a rectangular newel. The hall is said to have a plaster frieze around all four walls, with modelled dragons, birds, bunches of grapes, and originally had a plaster coved ceiling, perhaps a later insertion. Late C16 -early C17 oak panelled dado. Tudor fireplace on the N side.

Included at Grade I as one of the major Elizabethan houses of South Wales, which, having been under tenancy for the later centuries, has not been substantially altered or modernised.