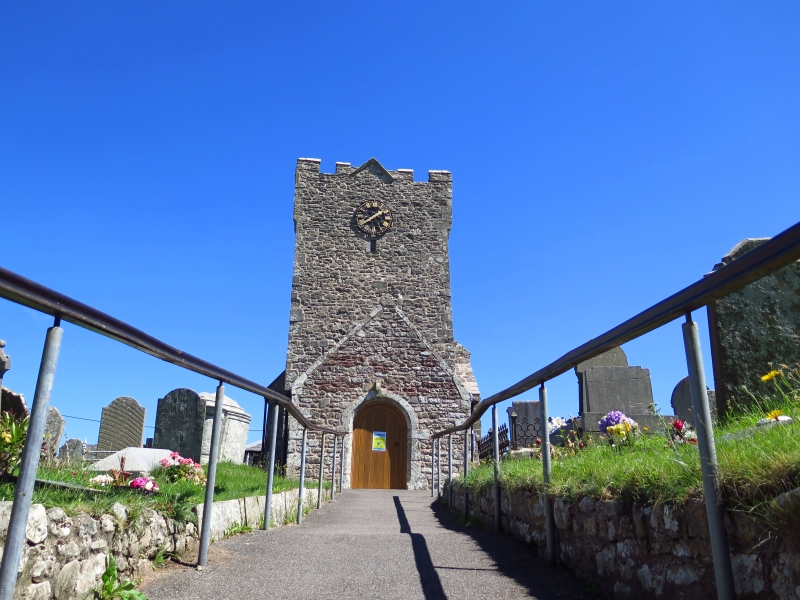 Location: The church stands in a raised curvilinear churchyard on a high prominence above the former site of Kenfig, by the junction of the side road into Maudlam village.

Nave and chancel with a C19 N vestry, a square unbuttressed west tower with a W porch attached. The nave has 3 pairs of 3-light trefoil-headed windows on the S side only. The chancel has 3 trefoil-headed lights of C19 date set in the S extension under a continuation of the roof. Three cusped E lancets under an encompassing arch. Short W tower with a stair extension on the S, small rectangular openings and a crenellated parapet on corbels, incorporating small gables for the pitched tower roof. The gabled W porch has a hollow-chamfered stone W doorcase, probably C15, and oak door, and a blocked S door. The C19 N door to the vestry has a shouldered head.

Wide round-headed arch from the tower to the nave. Nave walls plastered, and 4-bay open timber roof, the four robust trusses being medieval or C17, with arch-braced collars carrying two tiers of purlins, the feet of the principals rising from within the walls. Chancel is raised by 2 steps, through a C19 arch, the inner arch order on corbels. Two-bay late C19 roof of a similar pattern to that of the nave. Rear-arch over E lancets. Encaustic tile floor. The organ chamber opens under an arch on the N, with the vestry to the E. A small light from the tower stair into the W of the nave, and a rectangular opening over the entrance door from porch to the tower.

Font: Norman, a handsome limestone tub decorated with 5 rows of scallops, and a rope moulding around the lip, said to have been brought from the early Church of St James, when it was overwhelmed.

Glass: E window of c.1920 by C Powell as a war memorial, and Nave S window by Frank Roper of Penarth.

Included at Grade II* as a building of substantially medieval fabric with an unusual early W porch, and a remarkable font.