Church of All Saints, Oystermouth

A Grade II Listed Building in The Mumbles, Swansea 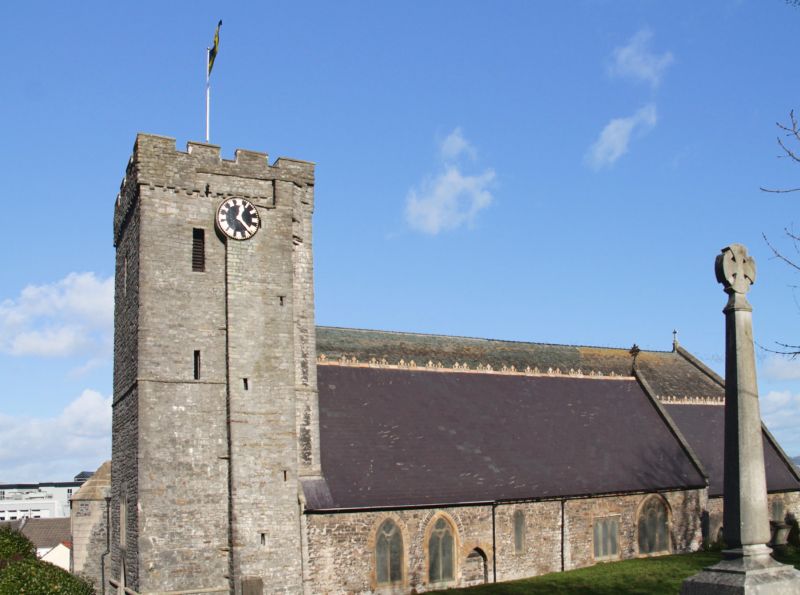 Location: On the N side of Church Park standing on high ground overlooking Oystermouth village centre to the NE.

Find accommodation in
The Mumbles

The church is first mentioned in 1141 and was probably built on the site of a Roman villa. The church was sketched by P J de Loutherbourg in 1800 and consisted of nave, chancel, W tower and a porch attached to it. According to Stephen Glynne, who visited in 1836, the windows were mostly Perpendicular. The nave had an E gallery from 1820 and a W gallery from 1835. Later in the C19 a N aisle and a new N porch were added, and in 1873 an organ chamber and vestry were added to the aisle by R K Penson. During this period the chancel arch was also altered. In 1915 the N aisle was demolished and a new church was erected by L W Barnard, architect of Cheltenham, in which the medieval nave is now the S aisle while the chancel became a new Lady Chapel.

The church is composed of an 'old church' on the S side, consisting of a W tower with a C19 porch on its N side, and a nave and a lower chancel that are now the S aisle and Lady Chapel. On the N side is the 'new church' of 1915, comprising nave and chancel under a single roof, a shallow N aisle and a low projection against the E end.
The old church is of rubble stone with a renewed slate roof behind C19 coped gables. The Lady Chapel has 3 stepped lancets of the C13 but re-set in the C19. In the S wall is a C19 2-light window to the R under shouldered lintel and relieving arch. A doorway with 2-centred head and ribbed C19 door is L of centre, and at the L end is a lancet. The short E return wall of the S aisle has a single lancet.
The S wall of the S aisle has windows of various dates. To the L of centre is a blocked medieval doorway under a 2-centred arch. To its L are two C19 2-light windows with geometrical tracery (one with a trefoil the other a quatrefoil in the head). To the R of the doorway is a late C13 or C14 cusped lancet, then a square-headed C16 window of 3 cusped lights with hood mould and label stops, and further R a C19 Perpendicular 3-light window with hood mould and foliage stops.
The 2-stage tower is unbuttressed and has a shallow projecting turret offset to the R in the S wall and breaking through a string course between the stages. The S wall has stair lights in the turret, a clock below the parapet, a narrow window above the string course in the ringing chamber and a narrow belfry window with louvres. The W wall has a similar belfry window. The W window is 3 cusped lights under a square head, while the W door has a 2-centred head and C19 boarded door with strap hinges. An impost band continues around the S face. The N wall has a narrow opening above the porch and 2 simple belfry windows flanking a round black clock face above an engraved tablet commemorating the gift of the clock by Francis Tippins in 1875. The porch abuts the N side of the tower and has a 3-light W window with cusped heads, to the R of which is a projecting 2-stage turret, of which the upper stage turns polygonal under a pyramidal roof of stone slabs. The turret has a narrow doorway in the W wall, similar to the tower W doorway, and a small window above under a shouldered lintel. In the N wall is a lancet. The N wall of the porch has a doorway under a lancet arch and a hood mould with large head stops. Double doors have scrolled strap hinges.
The 'new church' is in Perpendicular style, of snecked, rock-faced stone with lighter Bath stone dressings, and a slate roof behind coped gables. The nave and chancel have eaves cornices incorporating 4-leaf flowers interspersed with grotesque heads. Three clerestorey windows each have 4 cusped lights. The E end has a parapet to the gable with a big 9-light window. Below it is a projecting vestry, its roof hidden behind a plain parapet. It has 3 mullioned windows in the E wall, a similar window and arched doorway with ribbed door in the S wall. The vestry also projects on the N side of the chancel, where there is a similar doorway with ribbed door, but flanked by 1-light windows all under a single hood mould. On the N side are stone steps to a crypt below the N transept. The N and S walls of the chancel both have shallow set-back corbelled shafts and a single 3-light transomed window. The transept has a 3-light N window above a 3-light square-headed crypt window, both with hood moulds. The embattled N aisle has oversized gargoyles. At the L end is a 2-centred moulded doorway with ribbed door and hood mould, flanked by cusped lancets. Further R are two 4-light windows. The W wall of the nave has a set-back N buttress with gablet. Above the apex of the W window is an attached shaft standing on a corbel, as if intended to be carried up as a pinnacle but cut off by the moulded coping of the parapet. The W window is 5 stepped lancets, and L of the porch is a square-headed 3-light window with hood mould. The aisle has a 2-light geometrical W window.

The lofty nave has ashlar walls and a flat-pitched keeled wagon roof continuing to the chancel with a full-height Tudor chancel arch between. The roof has boarded panels and thin ribs. The principals stand on polygonal shafts rising from foliage corbels. The S aisle has a 5-bay Early-English style arcade (built for the C19 N aisle) with piers composed of 4 clustered shafts, moulded capitals and 2-centre arches with 2 orders of chamfers. The taller N arcade is 3 bays with octagonal piers, moulded capitals and 2-centred moulded arches. At the W end is a lower, narrower moulded arch without capitals. The N aisle has a simple lean-to roof. The S aisle has plastered walls except the Lady Chapel where rubble stone is exposed. The roof has arched braces and diagonal struts above collar beams, and is boarded behind the principals. The round-headed tower arch is plastered and probably early medieval. The moulded lancet arch to the Lady Chapel (formerly the chancel arch) is C19 and has no capitals except for an inner order with a moulded capital on a shaft with foliage corbel.
In the chancel is a 4-centred arch to the Lady Chapel set within 2 blind 4-centre arches. The sedilia have vaulted canopies and crocketed finials. The piscina is similar and the basin is contained within a polygonal projection. The N transept houses the organ.
The font is C12 or early C13, a plain square bowl with lobed undersides, on a round pedestal and square base. The tall Perpendicular style font cover is late C19. In the Lady Chapel is a circular pillar piscina with moulded base and block-shaped capital containing the basin. A tall rood screen by Barnard was erected as a memorial to the 1914-18 war and the names of the war dead are carved in relief on the dado. The screen is 5 lights, the central light of double width, and has ribbed coving, a pendant frieze, a cornice of vine trails and shields, and brattishing. Above is a rood image. The S aisle chapel also has a rood screen, commemorating Captain Edward Strich (d 1915), an inscription to whom, with linenfold panelling, forms the dado. The remainder of the screen is composed of a central doorway flanked by 3 Gothic traceried lights, above which is a moulded cornice and brattishing. The pulpit has an inscription at its base but the date is obscured. A shaped, polygonal stone base has blind Gothic panels to the stem and a moulded cornice. The pulpit itself is of wood and richly detailed, with open ogee arches and diagonally set pinnacles. In the chancel, the choir stalls have moulded ends with poppy heads. The communion rail was added c1929 and has panelled, fret-cut balusters and is infilled with ironwork tracery with a moulded hand rail. The rail is wholly replaced in the centre. The reredos, depicting scenes from the Life of Christ in the style of manuscript illuminations, was added in 1951 and is by Faith Craft Works of St Albans.
The windows have glass demonstrating changes in style from the late C19 to late C20. In the traditional style E window of c1929 is Christ flanked by saints Peter and Paul, Asaph, John, David, Deiniol and Woolos. The chancel S wall has a window depicting Faith, Hope and Charity commemorating Isabel Crawshay (d 1863). Glass in the Lady Chapel is dated 1918 and 1923. In the S aisle are windows with allegorical scenes by Curtis, Ward & Hughes of London, dated 1903, and by Joseph Bell, dated 1880. In the N aisle are 3 similar traditional-style windows of c1915, including the Bible story of the loaves and fishes to commemorate the loss of the Mumbles lifeboat in 1903, and Christ walking on water, with a lifeboat below, commemorating the loss of the lifeboat in 1883. Post-war glass is mostly by Tim Smith: In the north aisle is a large representation of the lifeboat and crew dated 1977, and a Remembrance Window of 1989. In the S aisle is commemorative glass entitled 'Adoration of Our Senses' dated 1986. A window dedicated to the Mumbles Railway dated 1982 is in the W wall of the N aisle.

Listed as a large church with substantial medieval fabric and good interior detail including early medieval piscina and font and C20 glass.