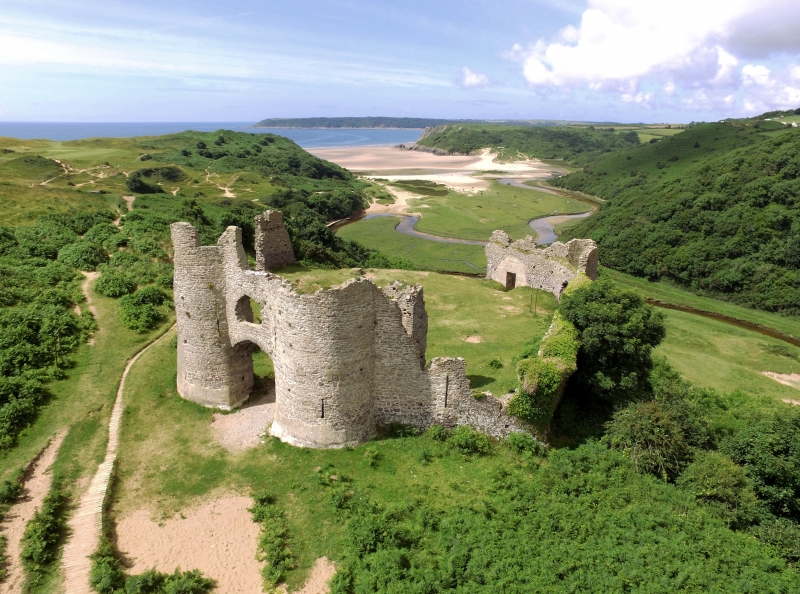 Location: Dramatically sited on the cliff overlooking Pennard Pill and Threecliff Bay and on the W edge of Pennard golf course.

Pennard was a demesne manor of the lords of Gower, and the first defensive work on the site was a ringwork of the C12. A small settlement with church grew up adjacent to the castle. A detached stone hall was built inside this ringwork in the C13, as revealed by excavations. The curtain wall and gatehouse were rebuilt in stone in the late C13 or early C14. The comparatively flimsy walling and light defences suggest it was built when the threat of Welsh wars had receded, while its gatehouse is a copy of substantial Edwardian gatehouses such as Caerphilly. During the C14 the court of the lordship was occasionally held at Pennard rather than Swansea. The settlement and church suffered the encroachment of sand dunes from the C14 and the settlement and church were rebuilt further inland. The castle was described as 'desolate and ruinous' in 1650, although an engraving of 1741 by the Buck brothers shows most of the walls standing to their full height.

Ruined castle of rubble stone walls, of which only the curtain wall and gatehouse survive in part. The E gatehouse has a segmental arch to the main doorway with a segmental-headed window above it. It is flanked by 2-stage half-round towers, which are battered at the base. The S tower is less well preserved and is partly reconstructed and supported with concrete underpinning and cement render. It has a first-floor arrow slit facing the entrance, and the partial survival of 2 merlons of the battlements. The N tower has an arrow slit in the lower storey, and a similar arrow slit facing inwards above it. The curtain wall N of the gatehouse is set back at an angle and has a tall, narrow, flat-headed window. The N wall has numerous putlogs, above which is a row of similar sockets that were used to drain the wall walk. At the W end is a shallow garderobe projection, although the wall is now breached here. The NW angle has a half-round turret, its wall partly fallen away facing the steep cliff. Inside the gatehouse, the N tower has wide embrasures and segmental rere arches to the windows, and a further arrow slit facing the gateway, its rere arch now missing. An inset band defines the level of first-floor beams. The rear of the tower is square and wider than the half-round front, resulting in an irregular plan. Of the narrower S tower little is now visible above ground level. The first-floor arrow slit has a concrete lintel in place of the rere arch. Of the curtain wall on the N side, the face of the wall is partly missing and no wall walk is now visible. The NW turret has, in its W wall, the embrasure of a former window, its rere arch now missing. Against the exterior of the W curtain wall is a tower added after defence ceased to be the principal purpose of the castle. The opening in the curtain wall was previously breached and is infilled with modern blockwork incorporating a doorway. Inside the tower are the raked sills and embrasures of W and S windows, and numerous putlogs. A detached curved section of the S curtain wall also survives.