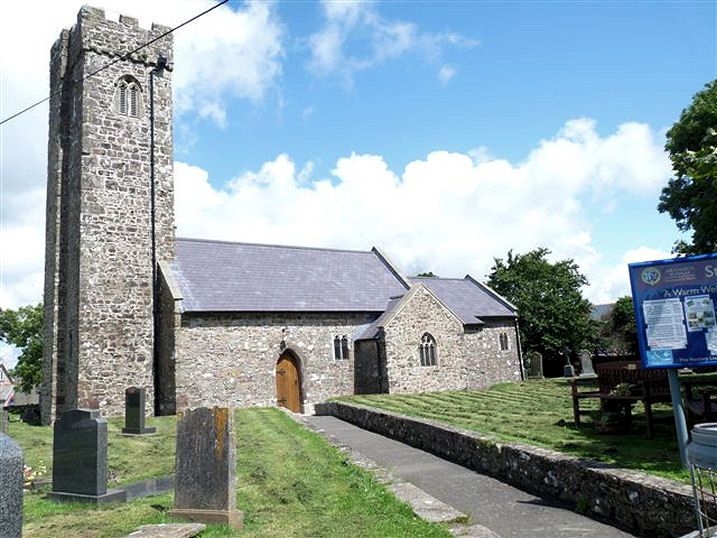 Location: In centre of village, in churchyard to E of main road.

Anglican parish church probably all C15 of a single build, though possibly remodelling earlier work. Cruciform plan with nave, shallow transepts and chancel with side projections, and exceptionally thin W tower. In 1852 when visited by Sir S. Glynne there were no battlements to the tower, the nave windows had been nicely restored, but he describes the C15 transept windows oddly as flat-headed. He describes apparently two chancel recesses on the N side and one on the S, with sloping roofs.
The church was restored shortly before 1852, and in 1893 by Kempson & Fowler with new chancel roof, window in tower, tower screen and some fittings. Further work in 1908-9 including repairs to tower and some fittings including pews and pulpit made by Hems of Exeter. Restored 2003 by Wyn Jones of Haverfordwest.

Parish church, rubble stone with ashlar tracery, and slate roofs with coped gables renewed in 2003. W tower, nave, shallow transepts and chancel with lean-to side projections. W tower is exceptionally thin with battered base, corbelled parapet and restored battlements. The NW stair tower projects on both W and N faces. Unusually good tracery to the bell-openings on W, N and S: C15 moulded 2-light with cusped heads to lights, quatrefoil above and hoodmould. The windows are offset on W and N by stair tower. E side has plain rectangular opening and dripcourse over nave roof. W small ground floor C15 flat-headed 2-light with cusped lights, no other openings, and tower is sheer without a base, slightly tapered.
The nave has pointed chamfered S doorway with plank door and iron strap hinges, and renewed C15 flat-headed cusped small 2-light window while N side has blocked pointed chamfered door between two 2-light windows, the left one with simple renewed arched heads to lights of C16-17 type and the right one with renewed C15 cusped lights, all windows have rough stone voussoirs over. Matching small transepts with low roofs and end-wall renewed C15 Perpendicular Gothic pointed 3-light windows with panel tracery and hoodmoulds, the S transept window larger than the N one. Chancel is lower, 2-bay, with roof carried down over projecting W half of each side wall. Two C15 2-light flat-headed windows with cusped lights and rough stone voussoirs over on S side, one only on N, in projecting part. There are some rough voussoirs in S wall to left of right window that may indicate a lost opening. E end has renewed 3-light Perpendicular style C15 window as on transepts.

Interior with whitewashed plastered walls, cambered-arched stone vaults to tower and the 2 transepts, the tower vault with circular bell-hole. Tower has stone winding stair, the tower NW corner curved to accommodate stair. Tower arch has straight sides and cambered head, plain 1893 boarded screen. Nave has C19 roof of thin arch-braced collar-trusses the braces on timber corbels. Large red quarry tiles to floor. Openings in cambered-headed reveals, N side has blocked door. Transepts are shallow with plain cambered openings following line of vaults. N transept has plain panelled oak screen possibly of 1908 and a corbel on left wall. S transept has C15 small pointed piscina. Broad C15 chamfered pointed chancel arch of tooled stone with broach stops. Three large corbels over. To each side is flat-headed C15 2-light window opening into chancel with recessed chamfered uncusped pointed lights. Above and to right of left window is moulded coved short shelf or bracket, of uncertain date. No step to chancel which has 1893 scissor-rafter roof and flagstone floor. Stone step to sanctuary incorporates a C14 or C15 grave slab with incised cross with foliate ends to arms and step base. Chancel side recesses have broad cambered arches, N one has a corbel set high in angle to chancel W wall and corbel set lower than arch springing to E. S recess has corbel at similar height to E. N wall has a shallow tall cambered-headed shallow recess to right. S wall has C15 pointed chamfered piscina with moulded base below left window and fine double sedilia with two pointed chamfered arches, simple column shaft between, the base moulded the cap a plain block running back and carrying arches. The chamfers are stopped with broach stops and a little raised diamond above broaches. The seat is apparently a reused C14 grave slab with incised cross, the head in a ring and with long shaft.
Fittings: C12 font with square scallopped bowl on round shaft and moulded square base. Oak pulpit of 1908, five-sided on octagonal squat base with moulded plinth and cornice, the top with pointed tracery to large panels above pairs of quatrefoils, on 3 sides, and 2 narrow panels flanking. Pews of 1908 with panelled backs and panelled ends. Chancel stalls with traceried panelled fronts and fielded-panelled backs, probably of 1908. Mid C20 altar with Gothic panels and C20 timber rails with turned balusters between panelled piers.
Stained glass: E 3-light window has small centre light with Christ blessing, by Celtic Studios 1968.