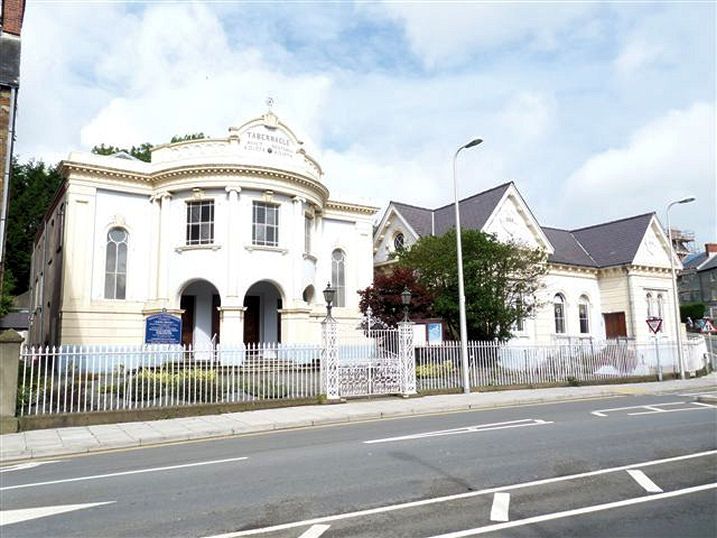 Independent chapel of 1774 wholly remodelled in 1874 to designs by Lawrence and Goodman of Newport, Mon. The previous chapel was square with a hipped roof and three-bay front, narrow pedimented projecting centre with arched doorway, and long side windows (of 1851, replacing original windows on two floors). The interior was divided by columns and had a plaster vault.
The congregation had begun as a Methodist group under the Rev. Howell Davis from 1743, and grew after George Whitefield's visit to the town in 1768, but split from the Methodist Association in 1790. The rebuilt chapel was designed to seat 750 at a cost of £1,500. A new organ by Sweetland of Bath was inserted in 1879. There were repairs inside in 1903 by A. H. Thomas of Haverfordwest. A memorial window to the dead of the Great War was added in 1920.
The basilican plan with apse and barrel vault is exceptional among Welsh chapels. The very fine ironwork is probably by W.A. Baker of Newport.

Chapel, painted stucco with triple hipped slate roofs. Ornate two-storey front elevation, the lower storey acting as a podium. Painted stone plinth of squared blocks with tooled edges. In centre, and carried on three open arches, is a big half-round projection three windows wide, and this is flanked by single bay wings. Full entablature with dentilled cornice, blocking course over the wings but centre bow with high parapet in three bays divided by piers. Outer bays have blind roundels in parapet, narrower centre has a big segmental-headed feature with triple keystone framing panel with an inscription reading "Tabernacle built AD 1774. Restored AD 1874". Wrought iron cross above. Centre bow has tall slim Ionic columns framing the bays, a pair to outsides and two single columns, standing on high pedestals from which spring the three arches of the entry. Three big first floor windows in shouldered architraves with acanthus keystones, scrolls to base of jambs and sills with small brackets. Big rectangular windows with marginal glazing bars. Outer bays have channelled rustication up to level of top of column pedestals, broad panelled pilasters to outer angles and stepped stucco band under a long arched window in architrave with big triple keystone and scrolls to bottom of jambs. Within the arcade are three large doors into the chapel, double doors in centre, single each side, with renewed heavy panelled doors and overlights. Plain rendered side elevations with cambered headed windows to upper floor and nogged red brick eaves.

Fine interior divided into nave and aisle form by tall cast-iron columns with florid leaf capitals. These carry elliptical arches with decorative plaster roundels in the spandrels. The columns are threaded through the galleries which have a plain frieze and cornice under very fine long panels of pierced scrolled cast-ironwork to a vine pattern. Cornice breaks forward over columns. Arcade terminates at big pilaster responds with ornate capitals. Aisles have flat ceilings and raked seating. Centre has fine plastered segmental-arched vault, panelled and with decorated plasterwork to transverse ribs corresponding to the bay divisions. The centre panels have highly ornate plasterwork to alternate panels, of an acanthus leaf design. The big end piers frame the round arched apse which has rope-moulded ribs radiating from an apex rose down to corbels between the heads of seven round arched windows. Between the ribs are cross-shaped plaster decorative plaques. Below the windows is a broad band with seven plaster roundels, above plain back to the pulpit. Pulpit is of platform type, curved with cast-iron balustrade. Curved rail to great seat in front on three ornate cast-iron scrolled uprights. The apse stained glass has lily, vine and other motifs. In the entrance lobby wall stained glass war memorial window of 1920.

Graded II* as one of the outstanding chapels of the region with particularly fine interior.