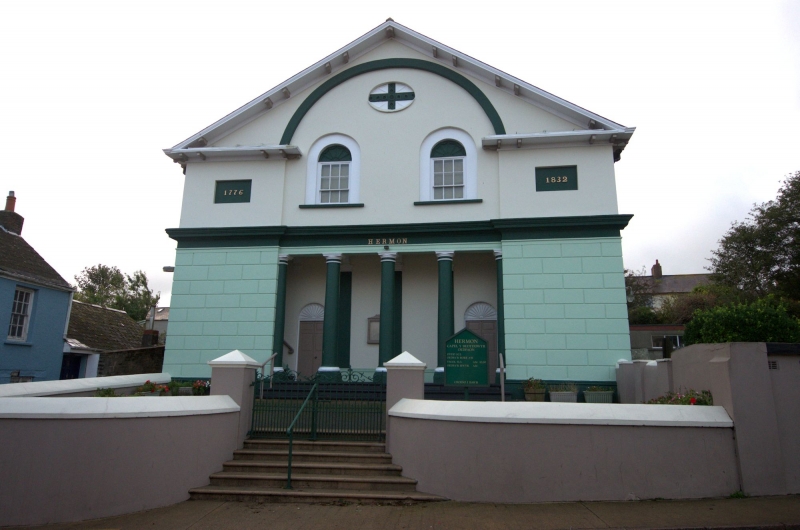 Location: Situated set back from the street line W of No 21, in raised paved forecourt.

Baptist chapel of 1832 probably designed by Daniel Evans of Fishguard and Cardigan (from similarities to his Bethania Chapel Cardigan of 1847), but possibly by his father David Evans. A chapel of pioneering design in Wales, in that it is among the earliest examples of the great central arch feature breaking into a pediment, that in cruder form became a standard feature in chapels of the 1860s and 1870s. This design however has a neo-classical subtlety quite exceptional for the period, depending on relation of windowless side bays, acting as piers to the main arch. The original interior survives almost intact although the chapel was modified in 1906-7 by George Morgan & Son of Carmarthen, being extended to the rear for new choir gallery, organ and vestries.
The original chapel was built in 1776.

Baptist chapel, painted stuccoed front, rubble stone sides and slate roof. Fine large open-pedimental front, the pediment deeply overhanging on paired brackets and framing a wide arch. Within centre arch are a large oval gable vent panel with cross within quadrants of Adamesque fan-patterned plaster, the cross pierced with tiny lozenges and a centre circle. Two fine first floor 9-pane sashes set under arched blind fans of similar Adamesque plasterwork, and recessed within broad arched surrounds with long sills. Ground floor has fine recessed portico of 4 bays, 3 Roman Doric columns and a half-column each end, carrying full entablature. Portico is reached by 3 broad slate steps. Within the portico are encaustic tiles, a 6-bay panelled ceiling carried on arches from 3 pilaster responds and 2 outer console brackets. Middle arch is panelled with a rosette. Each side of the pilasters is a fine arch-headed door with blind traceried fanlight and double 3-panel doors with fielded panels. Off to each end are 8 slate steps rising to landing and 6-panel doors into chapel gallery.
Centre is framed by windowless sides that rise up to support returns of open pediment. Rusticated ground floor with full entablature carried over from centre and then stucco above, roughly square with inset square datestones '1776' to left, '1832' to right.
Side elevations of rubble stone, each originally of 2 storeys and with 3-window range of 12-pane sashes with stone voussoirs and tooled stone sills. Left side has 1906 added section with 3 first floor 12-pane sashes, one to right of a door, 2 to left. Modern single storey room against S end of SW elevation.
Forecourt enclosed by stuccoed wall curving inwards in centre, round a flight of 6 steps from pavement to gatepiers with double iron gates to raised forecourt. Old photographs show a different arrangement with iron railings each side and wrought iron overthrow between stuccoed gatepiers on street line.

Interior mostly of 1832 but pulpit and S end with organ gallery added in 1906-7. Fine original ceiling with swirled Adamesque centre rose bordered by swirled acanthus. Plain outer ring and then double border with 9 square panels each with an X-shaped leaf-motif. The 3-sided gallery has vertical panels, the raised panels within with slightly rebated corners. Seven wooden columns, the bases raised above pew-height. Fine set of painted grained panelled box-pews in 3 blocks, the outer blocks of 2 raked inward-facing pews, the centre ones raked upwards towards the rear, first one step and then 3 under gallery, the bench-ends ramped up in curves. One pew at front lost for inserted total immersion font. Panelling encloses sides of set fawr. Remarkable pulpit and small platform in painted wood, the platform balustraded with curved angles and reached by curving flight of steps from right with scrolled rail. The pulpit itself projects on a wine-glass type stem, of a single Ionic short column and then carved acanthus-leaf to the outswept underside of the pulpit. This is panelled, square, with rebated concave angles, the panels matching those on gallery.
1906 organ gallery behind pulpit has openwork iron frontal to double-curve profile, the ironwork by William Isaac of Carmarthen. In gallery is plain recess for organ by Grey & Davison in painted panelled case, probably earlier C19, brought from Shrewsbury. Behind chapel are rooms and hall added in 1906.

Graded II* as one of the most architecturally interesting chapel facades of its date in Wales, with near complete contemporary interior including fine plasterwork and gallery.