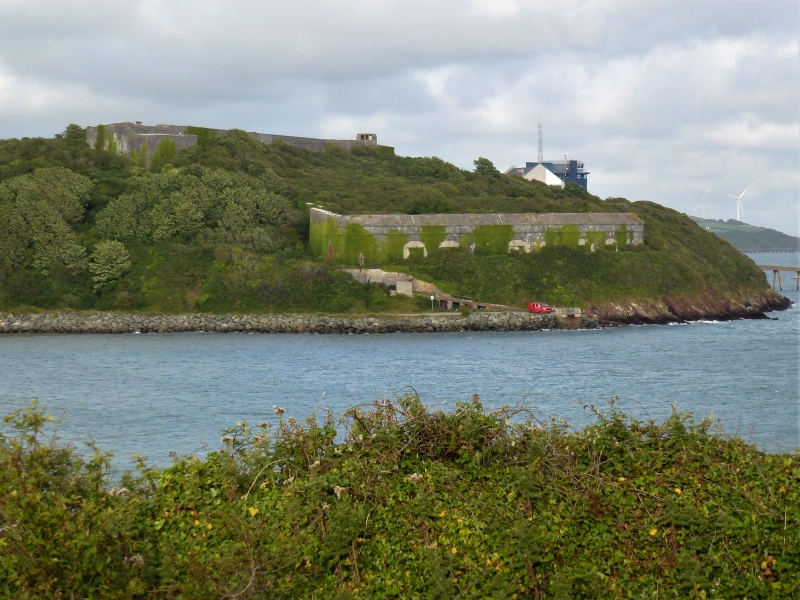 l863-5 defensible barracks and gun battery, built as part of the second phase of the fortification of the Haven ordered by Lord Palmerston in l850, intended for some 12 heavy guns in the battery with seven others nearby (these l9 later increased to 28) and a garrison of some 250 men in the barracks. Built at a cost of ú87,894.

Built with rock-faced blue limestone laid with remarkable precision, the roofs brick-vaulted, also of exceptional quality. The two major elements are separated by a considerable area of rough ground but both are within the encircling walls. To the N, the defensible barracks are parabola-shaped to NE, facing into a deep defensible ditch, with big SW cross-building, thus enclosing a roughly triangular court, the outer walls sheer, with flat parapet and rifle slits, small square windows and a cambered-headed N entry inscribed 'Fort Hubberstone' and VR l863. The feet of the parabola project beyond the cross range to provide covering angle bastions. Within the defensible barracks, the cross-range has two-storey l3-window flat-roofed facade with cambered-headed and arched doorways while the parabola is articulated as a series of giant two-storey arches, some 20 in all, brick-vaulted and formerly floored with rendered brick fronts within each arch. The outer four bays each side are wider than the rest. Flat roofs with brick chimneys behind the high parapet.

From the main N entry the outer wall runs impressively down to the SW lower battery, which has massive low-set curved facade with bull-nosed cornice and heavy parapet. Arched doorway to the gun-emplacements at N end and then sea-facing range of 12 massive square granite-framed gun-openings, mostly since infilled, but masonry of superb quality undamaged. Within is deep-sunk passage with row of granite corbels, stone rear retaining wall incorporating tunnels back into hillside and brick front opposite to the groin-vaulted gun chanmbers. Further fortifications to the east, and link back to SE corner of barracks are overgrown and difficult of access.

Part of one of the most extensive Cl9 fortification systems in Europe, and comparable only with the contemporary defenses of the Solent in Britain.