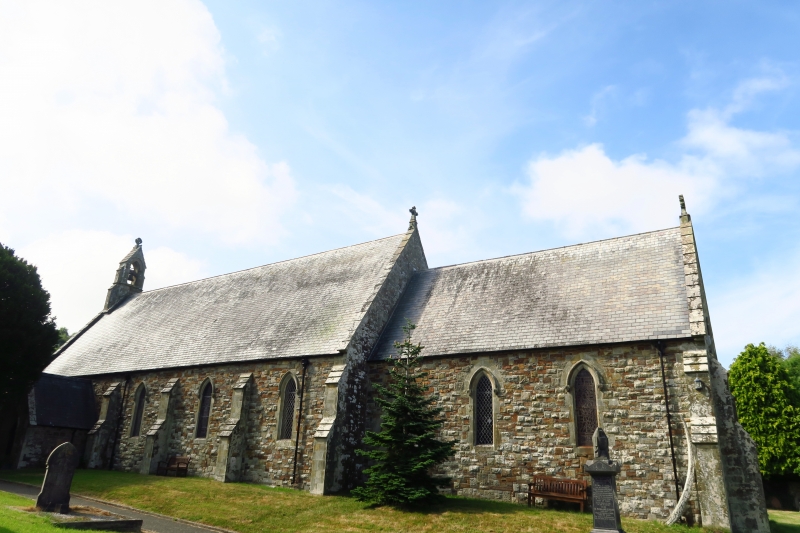 Location: Situated in large churchyard N of the abbey ruins.

The original plans were made 1847 for a church to cost £600, but the final cost was £1,500. A tower was proposed but funds were insufficient. Daniel Evans of Cardigan superintended the building, John Davies and John Thomas of Llechryd were the contractors.

Simple treatment with thin arch-braced collar trusses, ceiled above collars. Moulded stone chancel arch. E window moulded and shafted. Stained glass east window with 6 medallion scenes, 1852 by Bell of Bristol and in chancel S window of 1889 by Clayton and Bell in C16 style. At the W end, Sagranus stone, C5 or C6 inscribed in Latin "SAIRANI FILI CUNOTAMI" and in Ogham "SAGRAGNI MAQI CUNATAMI". By the S door a broken slab with wheel cross in relief. By pulpit, broken stone with incised sword hilt device. Font 1850, scalloped square bowl. Carved stone pulpit, octagonal with pointed arched traceried panels. Chancel stalls with poppyhead finials. In the chancel marble plaques of 1851, 1850 and 1825 on N wall and of 1865, 1868 and 1833 on S wall. Post-war brass lectern with Art Nouveau figure, said to represent the Angel in Revelations 10:2, “who set his right foot upon the sea and his left foot upon the land,” in allusion to the marine and estuarine traditions of the people of St Dogmaels.

Listed for special historic and architectural interest as an early example in W Wales of the gothic revival, employing historically correct detail.