A Grade II* Listed Building in Llanmaes, Vale of Glamorgan 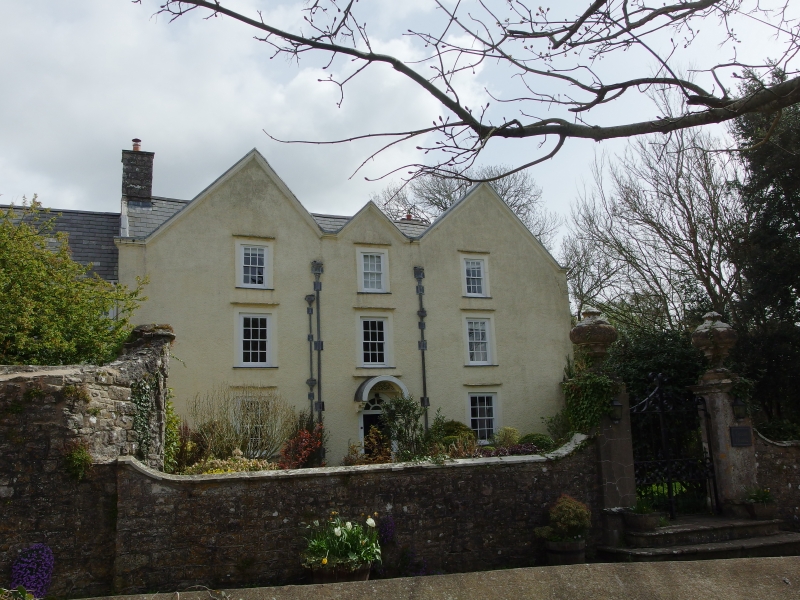 Location: In the centre of Llanmaes village facing the east end of the Church of St. Cattwg.

''''The house consists of two parallel E-W blocks linked by another block on the W which has the new entrance front, approached from the W through a walled forecourt; it is in two storeys with a cellar and attics. The South Block appears to be the earliest surviving part of the building, probably of C17 date; its E half contains a cellar below rooms at upper and lower mezzanine levels in relation to the rest of the building. The W half of this block and any older structure N of it were remodelled about 1700 as a cross-wing, providing a central entrance hall between two parlours, together with a rear projection for a stair set in the angle between these blocks. The resulting L-shaped house was given a symmetrical W front which effectively conceals the difference in periods of construction by having a gable on the N part to match the gable end of the S block, and a central doorway under a semi-circular canopy with the fenestration placed symmetrically around it.'''' (RCAHMW) The enlarged house was built for the Rev. Illtyd Nicholl who was Rector from 1699-1733, and it seems evident that all the work, especially the interior work, was not done at the same time. The house in this L-shaped form is shown on the 1843 Tithe map, but it was further extended at the very end of the C19 when a kitchen/service wing was added on the north, and alterations made to the decorative detail in several of the rooms. The house has been very little altered since.
There is almost no surviving evidence for what the house previous to c1700 may have been like. There are C17 beams in the cellar, but the reset fireplace in the late C19 wing is of Elizabethan or very early C17 character very similar to those at Nottage Court, Newton Nottage (qv) which dates from just after 1608. If it comes from the demolished part of the house then it certainly suggests that at least part of the house was of c1600. There is also a 4-centred arched stone doorway with hollow chamfer reused in the late C19 wing which suggests the same. As to the c1700 rebuilding it is curiously contradictory in that while the surviving sash windows were very up to the minute, the staircase and the plaster ceilings are rather old-fashioned. The staircase in particular looks more like c1680 with its very wide and shallow steps, while the oddly far apart turned balusters look more as if they might be an C18 alteration, which could also agree with the differing character of the apparently C18 panelling in the two main rooms.

An unusual frontage in white-washed rough-cast over local rubblestone, with Welsh slate roofs. Two storey and attics, double depth central entrance plan. Three front gables with moulded stone copings, the central one is smaller. Three windows, 6 over 6 pane sashes of different ages, mostly C20 but with some late C18 ones, flush frames with drips over. Central panelled door, arched fanlight, semi-circular timber and plaster hood on scroll brackets. Three lead down pipes with ornamental rainwater heads. Three large square stone stacks.
The right return elevation has mainly inserted windows of similar type.
The left return elevation has the late C19 wing, again with similar sash windows.
The rear elevation presents three gables as the front. The left-hand one has two over two 6 over 6 pane sash windows. The centre one is smaller and houses the staircase. Sash window above a doorway now covered by a late C20 conservatory. The right hand gable is late C19 and has a large canted bay window of 6-lights to the upper floor.

The front door enters a hall with the staircase at the rear. A slight timber framed partition divides off the Dining Room on the left but the joinery in the partition appears to be early C18. To the right is the solid wall of the older part of the house, again with early C18 joinery. The Drawing-Room has bolection moulded panelling and cornice, with a later C18 marble fireplace. Hidden door in the panelling to the right and to the left into a china cupboard with shaped shelves. The staircase is very broad and goes to the attic. It has a narrow open well, a closed string and rather slight turned balusters set rather far apart; broad moulded pine handrail. Moulded dado panelling which goes only to the first floor. The garden is reached through a late C20 conservatory on the half landing which also gives access cut at a slant through the wall of the house into the Oak Room at mezzanine level. This has unpainted panelling of c1730 character but some has been apparently altered or added. The 6-panel doors with their brass locks are certainly mid C18. The panelling can be seen to have been altered on the south wall where a large C20 window has been inserted. The cornice and the moulded plaster ceiling are of a more c1700 character. The fireplace is a c1840 marble one with an inserted stove. The Rose Room above this is also accessed off the staircase in the same way. It has a c1700 plaster ceiling of a rather old fashioned sort with a deep cove and a large central roundel, oak leaf decoration in the corners. Otherwise the decoration appears to be C18 except for the overmantel which is probably a late C19 addition. The cellar below this side of the house has a stone flagged floor with a drainage channel, which runs in heavy rain, and the ceiling is supported by chamfered beams with straight cut stops of C17 type. The Dining Room has late C19 decoration and the service rooms are plain. The main bedroom in the late C19 wing, now a billiard room, has an inserted late C16/early C17 moulded stone fireplace with thistle stops. The attic rooms are plain with the roof revealed as an A-frame with notched lap joints to the collars.

Included and highly graded as one of the best architectural and highly finished houses in the Vale.