A Grade I Listed Building in Llandow, Vale of Glamorgan 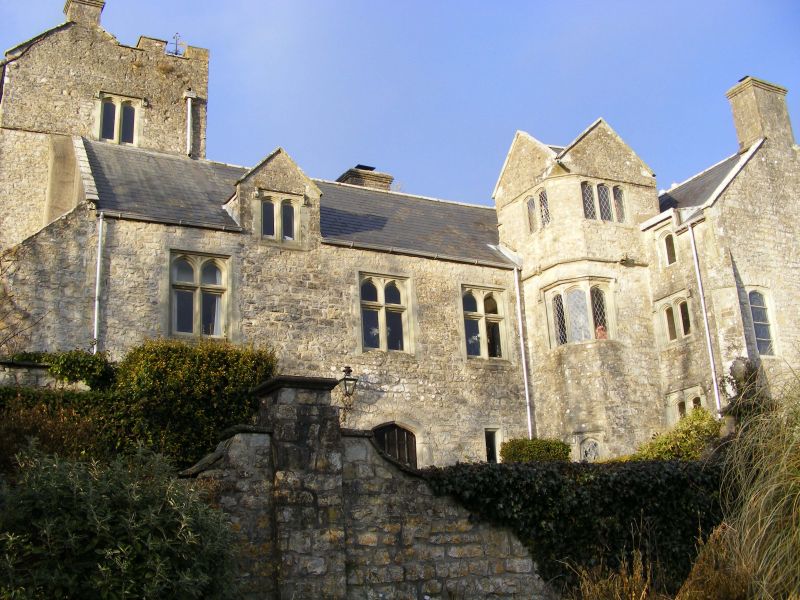 The earliest part of the house is the stone vaulted undercroft beneath the central first floor hall. This early structure was held by the Norriss family of Penlline in the C14. Llanmihangel was occupied by the Thomas family towards the end of the C15. James Thomas was Justice of the Peace from 1548-1559 and Sheriff of the County in 1551. He may have built the core of the existing house. The hall fireplace bears his arms, quartered with those of his wife's family (Van of Marcross). The wings were added in later C16 and there was further enlagement in early C17. Edward Thomas of Llanmihangel was Sheriff in 1633 and was created a baronet in 1642 and supported the Crown during the Civil Wars. In 1681 the house was sold to Humphrey Edwin, a London merchant and prominent Whig, who was Sheriff of London in 1688 and Lord Mayor in 1697. In the C18 the house passed via marriage into the Wyndham family and formed part of the Dunraven Estate. Thereafter the house became tenanted until finally sold in 1824. Extensively restored 1869-1882.

Predominantly C16 manor house with ecclectic assymetric elevations of lias limestone rubble with Welsh slated roofs and ashlar stacks. The house has an unusual complex plan comprising two suites of rooms aligned to the NW and SE articulated around a central first floor hall with vaulted undercroft, possibly surviving from the medieval building. The house is aligned on an EW axis cut into the N side of the valley of the Nant Llanmihangel and exploits the changes in level from the front to rear elevations. It appears probable that the present building represents the substantial reconstruction of an earlier medieval dwelling upon the site by James Thomas in the first half of the C16, substantiated by three remaining two-centred doorways variously with keel and cushion stops together with an earlier hall slab floor, now concealed beneath C16 oak floorboards. C19 re-fenestration and recent restoration. Predominantly 2 and 3-light square-headed windows with Tudor-arched lights and hoodmoulds; some, including to main front, with transoms and sunk spandrels.

The S elevation is of two storeys, punctuated by a three storey tower to the NW which rises above the ridge of the hall range. Distinctive gabled stair turret at the E end of the hall range at the junction with the E range. The ground floor has an approximately central, dressed lias stone doorway with four-centred head, plain chamfers and broad diagonal stops. The S face of the SE range has a large ashlar gable stack. At the left hand side at first floor level is a long leaded C19 stained glass window, depicting St. Michael set within a former doorway. The N elevation has, to right, at first floor level, a band of corbelled stonework from which rises the substantial coursed rubble hall stack (compare with nearby Garn Llwyd, Llancarfan). At basement level is a relieving arch, possibly indicating the former position of an opposed doorway to that on the S elevation. The wall returns to the right with a four- centred doorway at first floor level accessed via a timber stage. The N gable of the N range has 44 pigeon holes arranged in a pyramidal form above a modern slate lean-to.

A remarkably intact interior of strongly Elizabethan and William and Mary character remains. Floorplan illustrates the persistance of the first floor hall tradition into the C16 and possibly incorporates an earlier medieval hall within its structure. The hall is accessed by a substantial stone stair, rising from the segmentally arched undercroft; it has moulded handrail carried on corbels. The hall is of one-and-a-half storeys and three bays in length; it is likely that it was initially longer but truncated in the later C16 by the insertion of the great stair. Distinguished as having the finest surviving intact late Elizabethan decorative plasterwork ceiling in Glamorgan comprising moulded ribs in a typical repeating geometric pattern. Beneath the ceiling, the walls are panelled to full height with C17 small fielded panels with moulded posts, rails and muntins which appear to have been reused and of two dates. Carved frieze panels on the N,W and S sides and at the E end are a series of fine deeply carved panels in Renaissance style; above the central panel are the gilded carved arms of Elizabeth I, set between two pilasters and surmounted by a cusped pediment. Beneath this is a pair of double, bolection moulded doors ca 1700. The C16 hall fireplace (possibly reused) on the N wall is set towards the E end and is amongst the finest of its period surviving in Glamorgan. It is carved in Sutton stone, with carved heraldic panels over a depressed, and roll-moulded four-centred head with chamfered hexagonal bases and embattled cornice. Contemporary cast iron heraldic fireback. Broad early oak floorboards to hall. At the E end of the hall lies the panelled parlour, with full height bolection moulded, painted panelling of ca1700 or earlier C18, with a bolection moulded fire surround concealing a four-centred dressed stone surround beneath and a small four-centred doorway to the right of the fireplace is also concealed beneath a bolection moulded jib door. Plain plastered ceiling with large broad chamfered plastered beam. Above the fire was formerly a naive painting of a hound set within a bolection moulded surround, now relocated to the kitchen at the W end. The principal chamber is accessed via a cranked staircase from a secondary hallway leading from the main stair to the kitchen and W range. Two panelled, raised and fielded door, constructed in poplar. The chamber retains a full height scheme of bolection moulded deal panelling. C19 (?) decorative plaster ceiling of strongly geometric form with applied fleur-de-lys. C17 partition forming closet at N end of room (now concealed by panelling) of timber frame and plaster construction with squint (now concealed). Latrine shute at W corner of closet with part original oak seat. Kitchen retains large open fire with timber lintol and beehive bake oven (rebuilt) in N jamb. Liassic slab floor and exposed broad chamfered ceiling beams. Basement has plain segmental vaulted chambers. At base of principal stairs is a dressed stone doorway with bullnose stops. A more acutely pointed doorway with similar stops remains at base of a mural stair leading to the parlour at E end of the hall within the N wall of the basement. These doorways may indicate early origins for the present hall range. Other doorways are mostly four-centred, with C19 doors.

Listed grade I as one of the finest and most complete early gentry houses in Glamorgan.