Parish Church of St Michael and All Angels

A Grade II* Listed Building in Llandow, Vale of Glamorgan 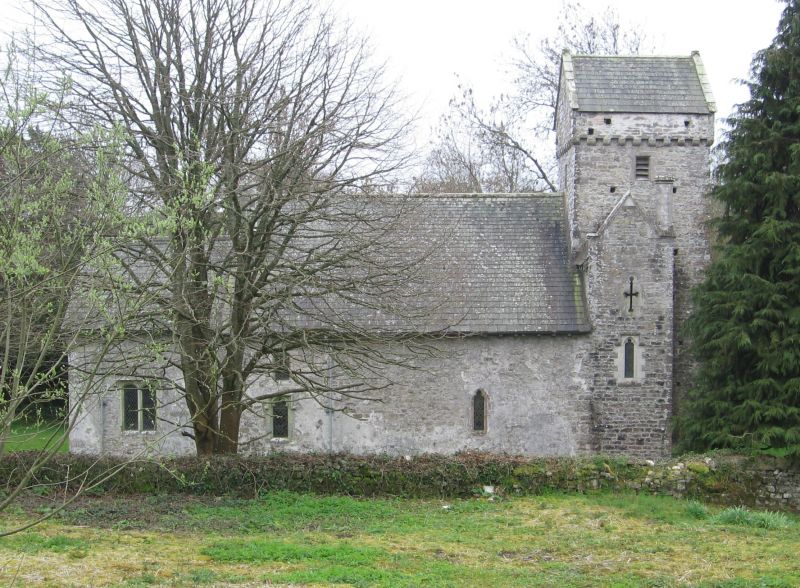 Entry Name: Parish Church of St Michael and All Angels

The church consists of nave, stepped down and narrower, chancel, south porch and west tower. The church has C11th origins and the present structure was first built mainly in the C13. The tower dates from the C15, the church was restored in Perpendicular manner in 1888-89 by John Morgan of Pontyclun to plans by F.R. Kempson diocesan architect, with donations from Lord Dunraven. The work included new floors, a new roof to the nave and re-seating throughout. New fenestration, including the E window was undertaken at this time. In 1909 a staircase turret was designed by E. Jenkin Williams of Cardiff, because the upper floors of the tower were originally only accessed by external ladder.

The church is constructed of random rubble with slate roofs to the chancel and nave. Three-light Perpendicular E window replacing the two-light squaare-headed window now re-set to N side. The E end of the nave and the stair tower have single octagonal shafted ashlar chimney stacks with crenellated caps. The S side of the nave is lit by a two-light, cinquefoiled window with foliate label stops. To the W of the porch is a single, square-headed light and a large buttress. The S porch has a slated gabled roof with an obtusely pointed, chamfered inner doorway and an acutely pointed outer doorway surmounted by a dripstone. Flanking stone benches. The tower has a saddleback roof with corbel table below and gables facing E and W. Each face has a square-headed louvred light with cross loopholes beneath. At the base of the tower is a heavy stringcourse. To the N side is the later staircase turret, lit by a trefoil headed lancet with cross loophole above. The W door has a rounded doorway with a two-light, cusped, square-headed window above. The N side of the nave is lit by a single cinquefoiled light with a square-headed light (formerly lighting the rood loft) above. At the W end of the nave is a trefoil-headed window. All the windows are glazed with lattice glass in pink, green and yellow. A round-headed doorway in the N wall leads to the rood loft mural staircase.

The chancel arch is rounded and plain with a pair of corbels, one either side indicating the original eaves height of the Norman church. The roof dates from the C15 and is in the form of a wagon roof. A Norman pillar piscina is set into the S wall of the chancel. On south side of chancel is a good early C18 classical wall monument to the Edwin family with fluted pilasters, composite capitals and semicircular pediment surmounted by putti and cartouche. The nave has a C19 arch braced roof with curved windbraces between the wallplate and the purlins and the principal rafters are lodged on large stone corbels. Panelled ceiling to the E end of the nave. On the N wall of the nave are four grotesque heads on the corbels, the other corbels around the church have small shields, each with a cross. On the N wall of the nave is a reset effigy of Griffith Grant (died 1591) with his hands elevated in prayer. A C19 pulpit, organ lectern and pews. C13 font on a circular stem to the N side of the nave. Tower arch is a narrow, two-centred arch.

Listed grade II* for its medieval origins and the special interest of its historic context with the Grade 1 Llanmihangel Place.