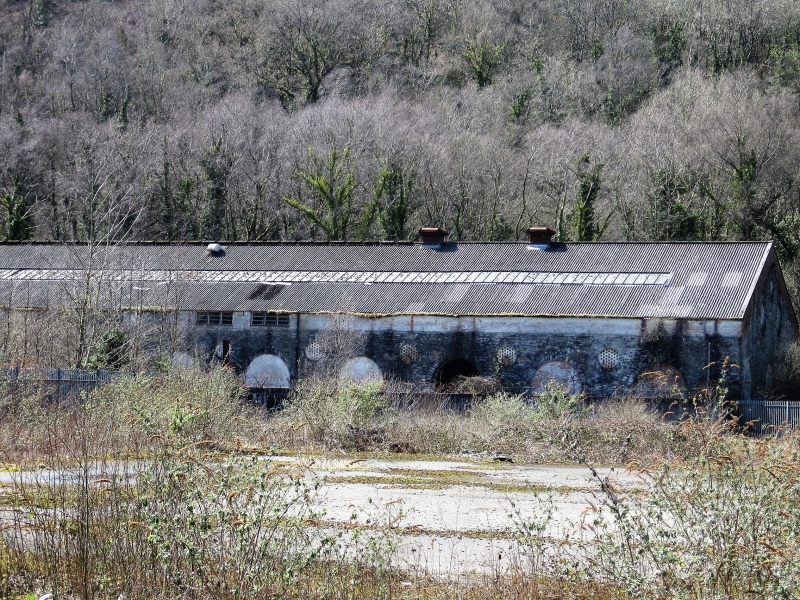 Location: On the N side of the former rolling mill.

The Treforest Tinplate Works was established in the late eighteenth century, but the surviving works dates from its rebuilding in 1834-5 by William Crawshay II of the Cyfarthfa Iron Co, although it was managed by his son Francis Crawshay. It coincided with the beginning of the accelerated growth of the British tinplate industry that continued throughout the remainder of the C19. Production began in 1836 and by 1842 it had fineries for converting pig to wrought iron, 2 mills for rolling the iron into sheets, furnaces for reheating and annealing the iron, and 2 tin furnaces in which the plates were immersed in a bath of molten tin. Power was provided by 8 waterwheels. The Tithe map of 1846 shows that the works was at that time all housed within what later became known as the rolling mill. A separate detached block to its N was probably the foundry mentioned in an inventory of 1842, but was probably demolished in the subsequent expansion of the works.

The tinning house was built c1854.

The tin house comprises 2 long parallel wings attached by link walls at either end, the gap in the centre being formerly occupied by a tramway. The walls are rubble stone painted white, the principal elevations having freestone dressings, the other sides brick dressings. The E wing has a slate roof (mostly now missing), the W wing corrugated asbestos-cement sheets. The tinning bays are housed in the E wing which is wider and higher. On the S side the E wing has an inserted wide doorway under a steel lintel, with a round-headed doorway to its R partly blocked, and a blocked opening below the apex. The link wall has a round-headed doorway obscured by a flat-roofed projection, above which is the lower section of a former bullseye opening that was part of a former attached range S of the tin house. The W wing also has an inserted doorway under a steel lintel. The long E wall has 9 round-headed doorways with flanking windows all with stone dressings and keys, the doorways at the ends being later enlargements. On the N side the E wing has a round-headed doorway L of centre, with a window to its L cut down to make a doorway, and a later doorway and lintel to the R. The gable has 3 stepped bullseye vents. The link has a round-headed doorway now blocked, while the W wing has an inserted doorway under a lintel. The long side wall of the W wing has partly filled openings, comprising 6 doorways and flanking groups of windows. The 3 windows at the S end have square heads and are later insertions.

The tin house originally accommodated 12 tinning bays ranged lengthways in 4 groups of 3, but the group S of the centre has been removed, leaving only 9 tinning bays in the W wall facing the passage between the wings. The bays have stone jambs, wide cast iron lintels and brick stack bases. At the rear of the bays the brickwork has 3 windows in each bay that lit the former tin baths placed beneath the stacks. On the outside, as viewed from the passage between the wings, the splayed stack bases are crow stepped but the stacks have been demolished to below eaves level of the building. Segmental-headed doorways, with windows above, are between each bay. The E wing interior is divided lengthways by a continuous spine wall of rubble stone, in which there are 9 doorways with flanking windows, all with brick jambs. The roofs of both wings are composed of wrought iron trusses.

The surviving buildings at the Treforest Tinplate Works constitute the most complete group of buildings in the industrial style developed in the iron and related trades of S Wales from the early C19. They form one of the most complete groups of tinplate works buildings of the C19, an industry of national importance dominated by S Wales. The tinning house is listed grade II* chiefly on account of its surviving tinning bays, the only such example in S Wales.