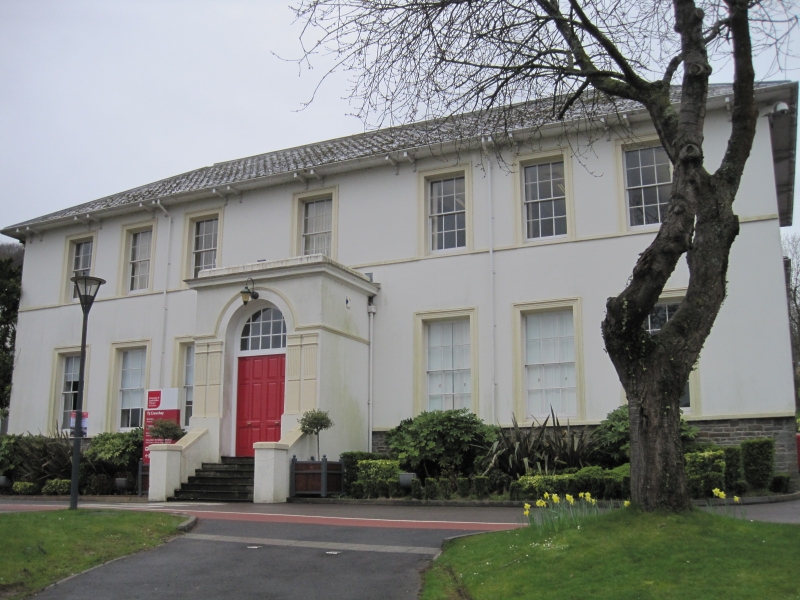 Location: Set back from and above Llantwit Road, and on the SE side of the University campus.

Built for Francis Crawshay, proprietor of the Treforest Tinplate Works, in the late 1830s and shown on the Llantwit Fardre Tithe map of 1846. The rear service wing was added in the 3rd quarter of the C19 and is shown on the 1881 Ordnance Survey. In 1912 the house was purchased by the South Wales Coal Owners and a year later became the South Wales and Monmouthshire School of Mines, when an attached 2-storey wing was added, designed by Teather & Wilson. This wing was subsequently raised to 3 storeys in the 1950s. The School of Mines was presented to Glamorgan County Council after the General Strike of 1926. It later became a Technical College and Polytechnic and is now part of the University of Glamorgan.

A symmetrical late-Georgian style house of 2 storeys and 7 bays, comprising main house and rear service wing, with an early C20 wing set back on the L side. The main house has walls rendered and painted white over a rubble-stone basement. The hipped roof projects on bracketed eaves and has synthetic slates replacing original slates. The front has 12-pane sash windows in moulded architraves. These are taller in the lower storey and have a sill band in the upper storey. A single-storey central porch, added in the 3rd quarter of the C19, has paired fluted pilasters, replaced double doors beneath a round arch with overlight, and roof concealed behind a moulded cornice. The side walls of the main house have rubble walls and brick dressings, with flat arches to sash windows. In the L side wall are 2 narrower bays, to the L of which is a vertical joint and a later extension of 2 bays (which has a domed cellar beneath). The R side wall is 2 bays, beyond which the main stair is recessed within a walled courtyard. The service wing is of snecked stone with tooled dressings and has a hipped roof of synthetic slates replacing original slates. This is 3 bays in the R side wall, and 5 bays to the rear, with a central 2-storey canted bay window.

On the L side of the service wing is a later link to the early C20 wing added by Teather & Wilson. Its front is set well back on the L side of the main house. It is 3 storeys, of pebble dashed walls painted white and replaced windows. The felt covered shallow pitched roof is a replacement of the early 1990s. The 7-bay front and 5-bay L side wall have simple classical detail in the 2 lower storeys.

An entrance vestibule leads through an elliptical arch with half-round columns into the stair hall added in the third quarter of the C19. The stair has a wreathed hand rail, plain balusters and moulded tread ends. To the L and R are 2 large rooms, on the R retaining panelled shutters to the windows, subdivided on the L. The rear service wing has an open-well stair with iron balusters. Beneath the L side of the house is a domed cellar or cistern with a central pillar on a plinth.

Listed for architectural interest as a late Georgian house retaining much of its character, and for its associations with the Crawshay family, one of the leading industrial families of C19 S Wales, and subsequently the S Wales School of Mines.