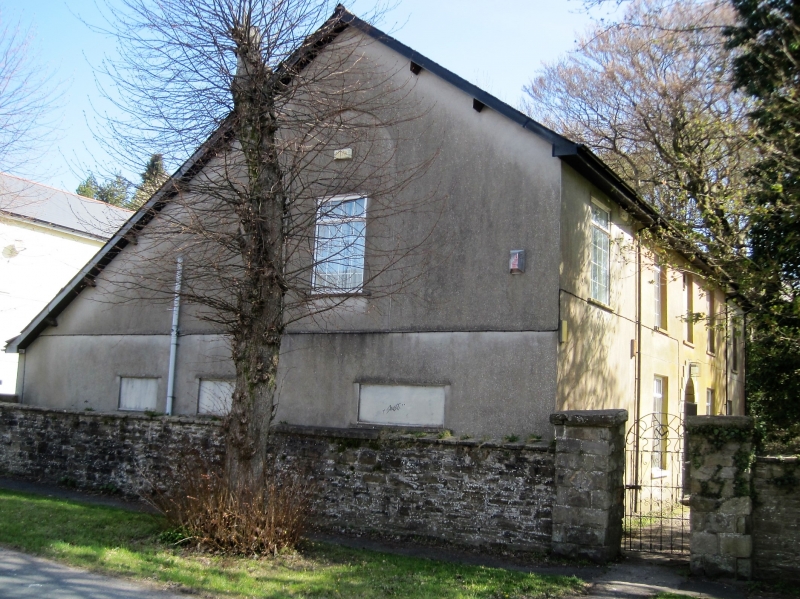 Location: The Terrace runs parallel with Rhymney River along its E bank; this building is at the N end of the listed group.

Built early-mid C19 as accommodation for managers/officials of the Rhymney Ironworks. Traditionally the large houses at each end (Nos.1 and 9) were for the Manager of the Company Shop and Chief Colliery Manager; the next two houses of intermediate size were for the Chief Cashier and Assistant General Manager; the central houses were for lower managers, surgeon, police officer and chief fireman. A rise in status meant a move to larger accommodation. End families were traditionally church supporters and the centre families chapel goers. The Terrace is called Buchan Terrace on OS Map 1875, referrring to Andrew Buchan, manager of Brewery and Company Shop, both situated along this street by the river. Residents objected to the brewery association which led to the change in name. Shown on same map as having a long T-shaped rear wing and with tramways running on each side of the terrace. Currently used as a Masonic Lodge.

Large two-storey house. Of stone with scored render; slate gabled roof, partly renewed, with overhanging eaves. On main garden-facing elevation the central symmetrical bay has a 3-window range though 2 are blocked to first floor; ground floor has central round-headed doorway with tooled architrave, recessed four-panelled door and plain fanlight, flanked by windows: end bay left has a single first floor window. Stepped back slightly the right wing has 2 blocked openings on first floor and one wide window to ground floor. Rear elevation has 3 blocked first floor windows and large lean-to extension against whole of ground floor. All glazing replaced since listing. Attached walls at NE and SW of stone rubble with terracotta capping enclose garden; SW wall has pier of brick and rock-faced stone at NW and pair of stone gate piers with caps and replaced metal gate; wall at S shared with No.2.

Listed as early-mid C19 housing associated with the Rhymney Iron Company. Group value with other listed houses and items in the range.