A Grade II Listed Building in Bonvilston, Vale of Glamorgan 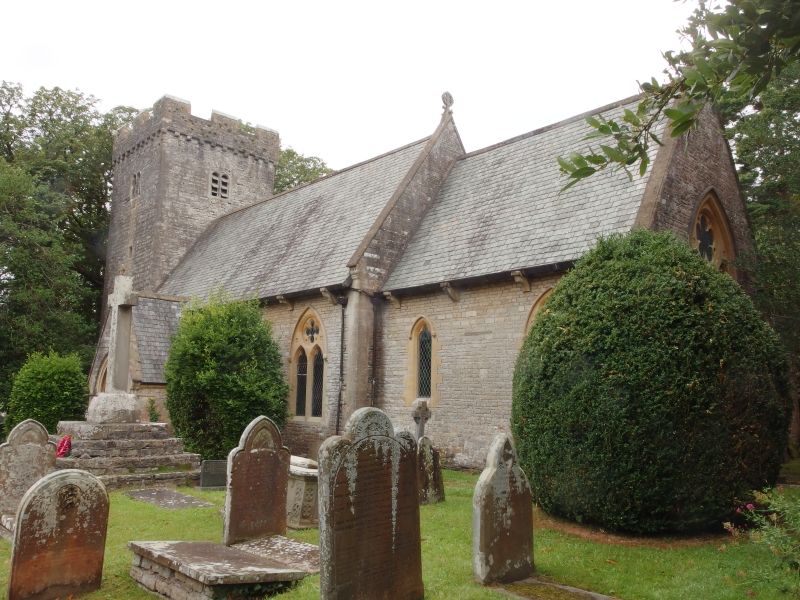 Location: Located on the N side of Cardiff road at the W end of the village opposite the Great House, elevated from the road

C12 origins with the tower added in the C15. Extensively restored and rebuilt in the C19 by Messrs Prichard and Seddon, architects of Cardiff, who reconstructed the nave, chancel, north transept and porch in 1863 in Early English style. It is understood that the church was in a ruinous state prior to restoration.

Elevations of local coursed limestone rubble with S elevation of nave and chancel constructed in narrow coursed limestone whilst the N elevation is composed of larger coursed random rubble. The chancel and nave have Westmoreland slated pitched roofs carried on corbelled eaves. The chancel is lit by a large 3-light E window with hoodmould. The chancel is lit on the S side by a single light lancet with cusped head and hoodmould over and a 2-light window with cusped heads and pierced trefoil over, beneath a hoodmould similar in style to that of the E window. The nave is lit on the S side by a pair of 2-light trefoil headed windows with plate tracery and a single trefoiled lancet with a trefoil in the apex, all surmounted by hoodmoulds and carved heads as label stops. The south porch at the W end has a steeply pitched slated roof and coped gable with Celtic cross finial. The inner doorway is a pointed arch trefoil headed with pierced cusps springing from the sides and an outer moulded arch. The entrance is flanked by slender shafts with a vertical fillet and terminate in small round bases on square plinths. The capitals have stiff leaf foliage. The side windows are trefoil headed with internal benches to either side. The W tower is of square plan and squat, constructed of limestone rubble with an embattled parapet rising from a corbelled table. The W door has a pointed arch and above it a 2-light cinquefoil headed window beneath ogee arches under a square head. The belfry is lit on four sides by 2-light windows of C16 form with pointed heads under a square head. It is understood that the mullions of these are worked from headstones by virtue of the inscriptions upon them. The nave is lit on the N side by a 2-light trefoil headed window with quatrefoil above, surmounted by a hoodmould with label stops. At the junction of the nave and chancel is a gabled extension lit by a C19 rose window with a slender pepperpot chimney stack in ashlar rising on the E side from the coping. Aisled chapel on N side of chancel with trefoil headed priest's doorway beneath a hoodmould. Single trefoil headed lancet to E side of chapel.

The church is set on an elevated site with a 2m. high coursed limestone rubble revetment wall with horizontal stone copings and a plain chamfered 2-centred arched gateway at the W end. Inset at the centre of the wall is a tablet memorial to the 1914-18 war.

The only remaining pre-C19 internal feature of note is the C15 chancel arch which consists of continuous moulding which springs from three moulded abbreviated capitals. The chancel has a C19 arch braced roof with diagonal bracing, the arch is supported by plain stone corbels with decorated wall plate. The C19 nave also has a similar C19 arch braced roof, carried on plain stone corbels with a decorated wall plate. On the SW wall of the nave is an early carved stone plaque of uncertain date depicting a male figure within a rounded arch, between vine leaves with a voluted scroll at the base. The tower arch is a plain pointed arch infilled by an oak screen of three bays with a doorway to the centre flanked by a trefoil headed light each with panelling beneath. The small circular font is C13 in style with six panels of leaf decoration. The choir stalls, altar rails, pulpit and lectern were designed by Messrs. J Wippell of Exeter and installed in 1908.

Listed grade II for its medieval origins and as an example of Prichard and Seddon's church restoration.