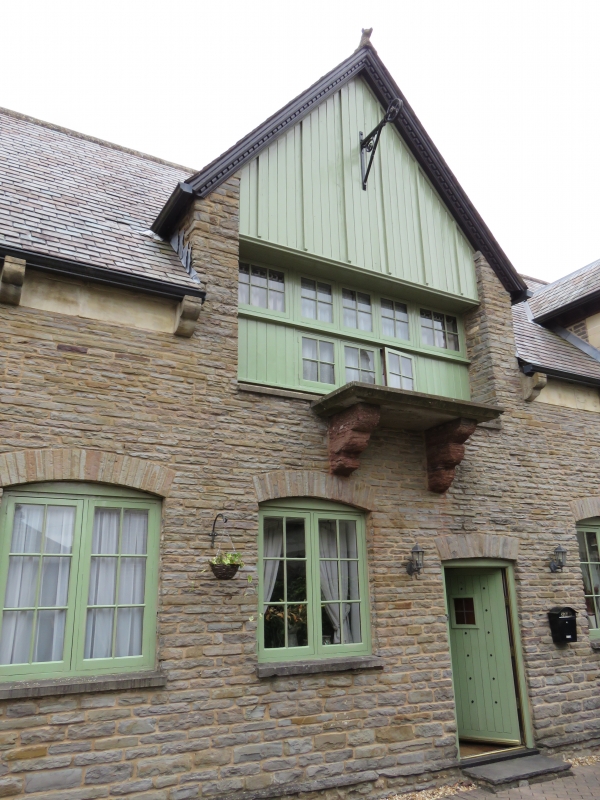 Location: On the north side of Fairwater Conservative Club (Ely Rise).

Probably contemporary with Fairwater Conservative Club (Ely Rise) and situated to the north-east of it. It was in poor condition when listed (May 1975) but it has been converted to domestic use in the late 1990s and is now considerably altered in appearance. Mid to late C19, probably 1860-80. Said to have been built for Robertson-David, a successful Cardiff timber merchant; the family certainly owned it for many years. Possibly designed by John Prichard, the Diocesan architect. It became part of the Conservative Club in 1941 when it was bought and presented by R C Evans, a committee member who was a large local builder.

Rectangular building constructed of roughly coursed, rock-faced, dark grey/brown sandstone with Bath stone dressings; Welsh slate gabled roof. Gable ends each with two trefoil headed lancets with 4-light pierced panelling above; carved stone bird finials. Long sides face south-west and north-east.
South-east elevation with gabled bay with bargeboard in centre; the gable features are new. At south end, stone stair rises up to door with gabled head. Some of the ground floor windows and doors are in original stable openings but the joinery is new, the upper floor window and all three dormers are new.
North-east elevation originally blind with the roof descending lower and stone eaves corbels. Now with a lean-to masking the right hand half with windows and door and window to left, two gabled dormers above and central 2-flued stack, only the stack is original.

Interior not available at resurvey but it has been completely changed through conversion to domestic use.

Included for its group value with the contemporary Fairwater Conservative Club (Ely Rise).