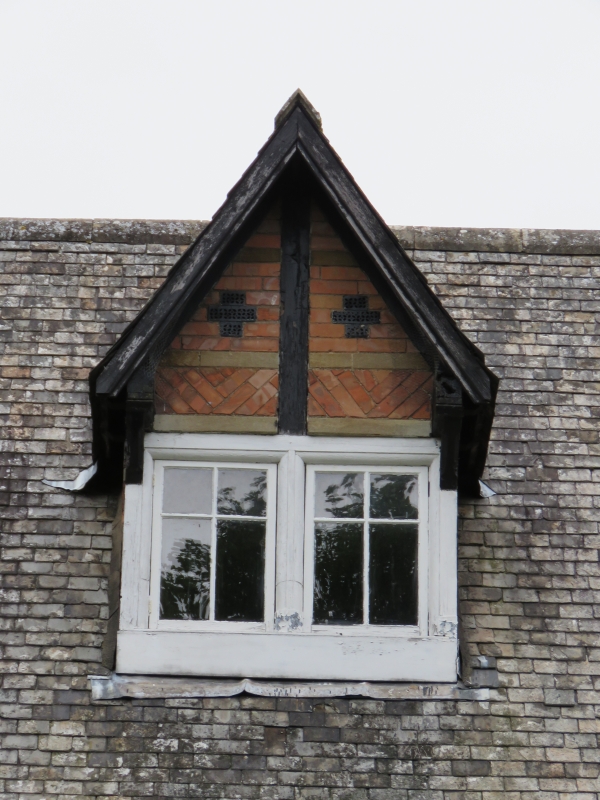 Location: On the north-west side of Canton by the junction with Pencisely Road.

Mid to late C19, probably 1860-80. Said to have been built for Robertson-David, a successful Cardiff timber merchant (initials on porch W G D); the family certainly owned it for many years. Probably designed by John Prichard, the Diocesan architect. It became the Conservative Club in 1941 when it was bought and presented by R C Evans, a committee member who was a large local builder. The considerable additions, function room etc. were made in 1973 (dated) and were designed by Burgess and Partners.

Large rambling Gothic style building with fine details. Built of polychromatic sandstone rubble with Bath stone dressings. Two storeys and attic with a multi-gabled and chimneyed roof.
Entrance front: This faces south-west. At the south (right-hand) end, there is a gable end to the garden wing with a shallow external chimney breast rising in steps to a 2-flued gable stack. Attached to this bay is a single storey club extension of 1973. The second bay comprises a gable end with the main entrance to the house; gabled porch with 2-centred entrance arch supported on Radyr stone columns with caps of cream ashlar. Four light oriel window with corbelling and peaked canopy above porch carrying the initials of the client W G David. This wing projects forward from a higher and wider wing with ashlar stack on gable end and with a 2-centred staircase window on first floor of gable end with transomed and mullioned window below. To the left of this is a bay, blind below with a 2-light window above and to the left again a 2-light window with a small window above.
The north-east elevation has three other gabled wings projecting from the main body of the house. Each of these has two smaller windows. The left hand gable has a stack, the right hand one a 3-flued corbelled stack, with more stacks on the main ridge behind.
Garden Front: (to south-east) of four bays. At either end projecting wings with splayed 2-storey bays; north bay with upper floor now rendered. From west to east, first bay with roof with semi-octagonal hip rising to a peak; foliated course with projecting gargoyles at eaves level; first floor window of 2-lights set round angles of splayed bay, columned shafts of pink Radyr stone between lights; three tall trefoil headed windows on ground floor set within each facet of splayed bay. Second and third bays with steeply sloping verandah across ground floor; flat headed mullioned windows on ground floor, 2-light windows with columns of Radyr stone stone on first floor, double paired on the left and paired on the right, and two gabled in roof dormers. Fourth bay at end with original polychromatic stonework only on ground floor, rectangular headed doorway and 2-light window with coloured shaft. Upper storey now with flat roof and rendered, this is said to have been an alteration in WWII when it was used as an ARP look-out. Steeply pitched roof with groups of diamond set pale ashlar stacks on the gable ends and also central to the ridge.
There are large extensions at either end of the garden front, on the left a single storey Ball/Function Room added in 1973, and on the right a single storey Snooker Room which is closely contemporary.

Gothic Burges-type alabaster fireplace with paired colonnettes in the entrance hall; doors in hall with linenfold panelling and architraves decorated with leaf motif, intricate finger plates. Timber Gothic staircase with panelled soffit, coloured glass roof light. The main Drawing Room has been amalgamated from the three original rooms along the garden front; these would possibly have been interconnected to start with, certainly two of them. Two elaborate fireplaces and panelled ceilings with moulded ribs. The upper rooms are all altered.