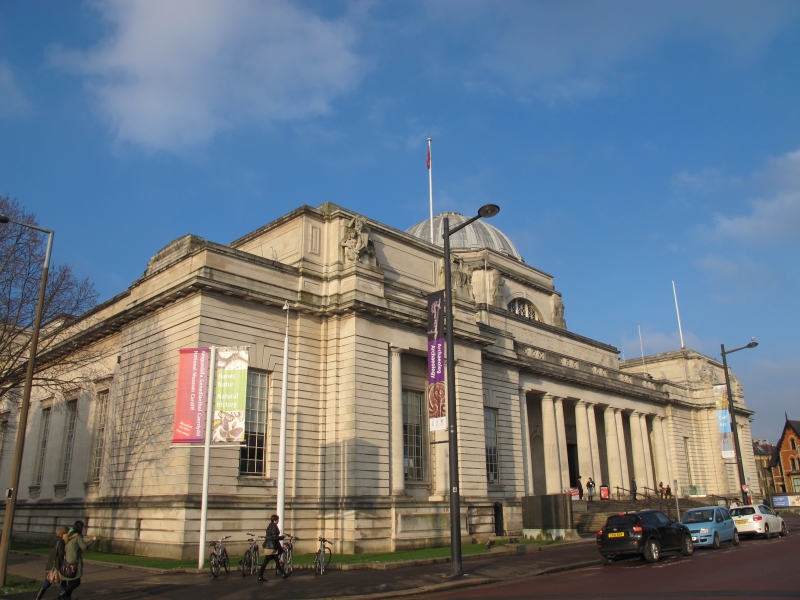 1910 onwards. Designed by Arnold Dunbar Smith and Cecil C Brewer. In 1905 building of a museum had been authorized to designs of Edwin Seward, architect, but no progress was made. A competition in 1910 was won not by the expected Lanchester, Stewart and Rickards, who had built City Hall and Law Courts, but by Smith & Brewer. The building in a simpler Classical style makes reference not only to City Hall (eg general proportions and dome, banded rustication) but also to Harris' Glamorgan County Hall (recessed portico with paired columns). East wing and lecture theatre opened in 1932; west wing, as late as 1967, by T Alwyn Lloyd and Gordon. The attic sculpture was executed to a scheme of W Goscombe John by T J Clapperton (Mining & Shipping Learning), Gilbert Bayes (Prehistoric and Classical Periods), L R Garbe (Medieval and Modern Periods), David Evans (music), Bertram Pegram (Art, and dome sculptures). The original plan for the building was never completed, and in the early 1990s galleries were added between the E and W wings to designs of Alex Gordon Partnership. The building was intended from the first as a National Museum of Wales, not merely for Cardiff, and forms an essential part of the capital's civic centre, the finest in Britain.

Magnificent spacious entrance hall with polished marble columns and floor. Central octagonal space beneath central dome with thermal windows (glazed with original pink glass). Tall piers, folded round inner angles of octagon. To each side, lower section with coffered ceilings and gallery round entire hall at high level on Ionic columns. To each end, broad staircases run up passing below gallery bridges and divide to give access to gallery, stairs top lit by glazed saucer domes. At upper level of octagon, stairs up to balcony off which are Library and Courtroom, both panelled, with Doric pilasters, and thermal windows, also other offices. Display galleries to front of building (Joseph Gallery, Pyke Thompson Gallery) in classical style with saucer domes. Semi-circular lecture theatre (said to be based on Ledoux's Besancon Theatre (1770s) with clerestorey windows behind unfluted Doric columns; semi-circular gallery over theatre. Other galleries in rear wings in various styles. Modern spacious light courtyard galleries (1993).

Graded I as amongst the finest examples of Early C20 civic architecture in Britain with ambitious exterior and extremely interesting interiors, particularly the entrance hall, perhaps the grandest and most sophisticated public interior in Wales. Part of a group of exceptionally fine public buildings in Cathays Park which form what is certainly the finest civic centre in Britain. In addition to its architectural interest, the building and its setting express Cardiff's claims to be a city of international importance. Group value with other buildings in Cathays Park.