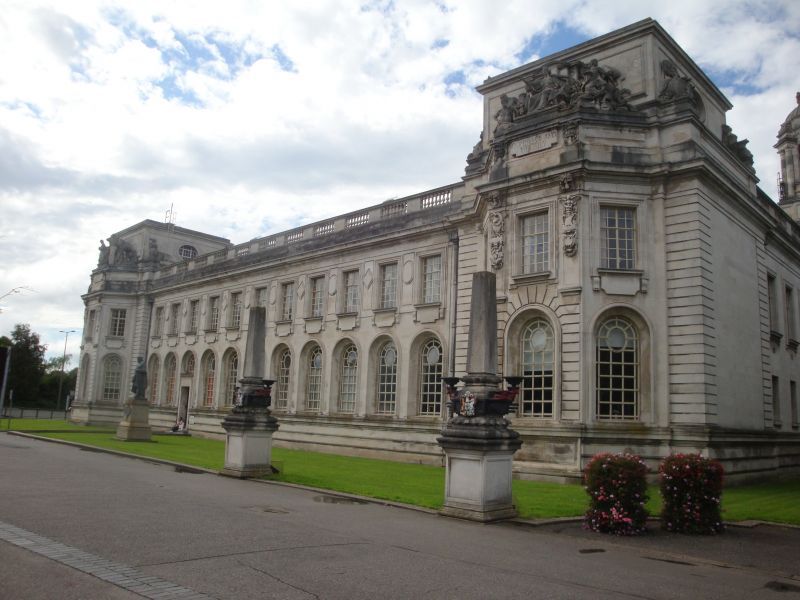 Cathays Park was purchased in 1898 by the Borough of Cardiff from The Third Marquess of Bute at a cost of £160,000 and developed as a civic centre to a layout by William Harpur, Borough Engineer. Cathays Park was developed over three-quarters of a century to become the finest civic centre in Britain reflecting Cardiff's status as city and eventually taking on a national importance as civic centre of the capital of Wales. A competition for Town Hall (Cardiff became a city only in1905) and Law Courts took place in in 1897; the Law Courts were built between 1901 and 1904 to designs of Lanchester, Stewart and Rickards; details of design by E A Rickards. Attic sculpture by Donald McGill and Paul Montford. Additional courtrooms 1966-1990; refurbishment 1991-95.

Two storey quadrangular building in Baroque style, faced with Portland Stone; small pane metal casement glazing. Main entrance faces NE. Nine bay centre has splayed rusticated doorway (with entrances to front and sides) in portico of Roman Doric columns in antis; heraldic shield above door. Portico surmounted by pair of towers with Wrenaissance cupolas with orb and crown finials, paired colonettes to corners; portico at head of wide flight of steps flanked by lampstands surmounted by dragons; at either end and in same plane, 1 bay with giant rusticated pilasters. To north and south of this centre portion, recessed lateral wings, each of 5 bays (rectangular windows on both floors, upper windows with moulded architraves) and at each end projecting pavilions of 1 bay width, windowless, with giant rusticated pilasters and square attic storey. South-east elevation of 11 bays. First floor windows with moulded architraves and aprons and with panelling between windows; ground floor windows round-headed at each end, 2-storey splayed bay flanked by giant rusticated pilasters; centre light of ground floor with rusticated and centre light of first floor flanked by trophies; each bay surmounted by attic storey ornamented with groups of sculpture; western group illustrating "Science and Education" and eastern group illustrating "Commerce and Industry". South West elevation steps down to one storey; advanced centre with doorway with 3 windows to each side; blocks of 8 bays link to end towers. North West elevation has 2 windows at return from front, then archway to central courtyard, and 6 window, 3 storey block, set forward.

Graded I as ambitious building reflecting Cardiff's claims to be a city of international importance by its use of the grand European Baroque style which was also used in London to promote that city's status as capital of an empire. The Law Courts form an essential part of Cardiff's civic centre, the finest in Britain. Group value with other buildings in Cathays Park.