Church of St Catherine (Church of England in Wales) 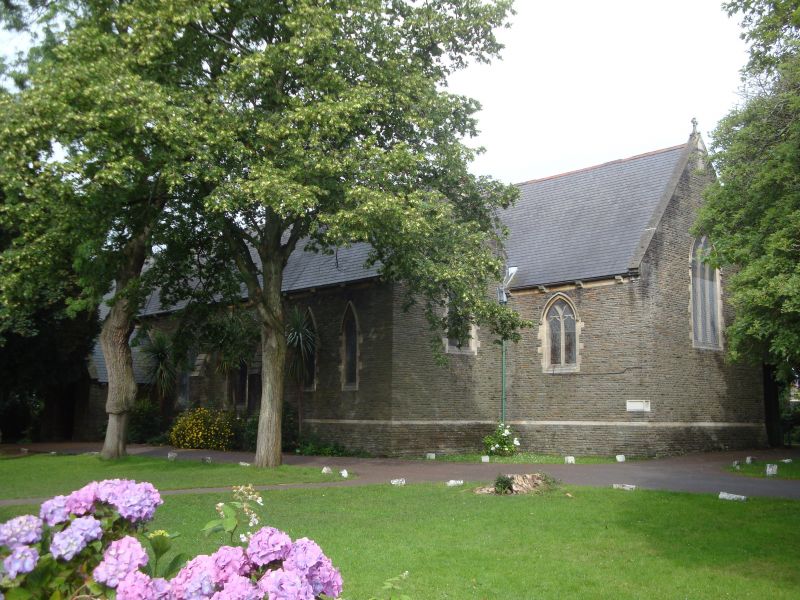 Location: In the centre of the Community about 400m north-east of Canton Cross.

First built 1883-6, architect, J Prichard. He did only the first three bays of the nave; Kempson and Fowler added the chancel with the south chapel and north vestry in 1892-3 (foundation stone 1892) and G E Halliday added the two bays of the west end in 1897.

The church is faced in thin courses of dark brown Pontypridd stone rubble with Bath stone ashlar dressings, Welsh slate roofs. Five-bay nave; chancel; side aisles and nave all with separate gabled roofs; Lady Chapel at east end of south aisle. Plain Gothic style with Decorated tracery, the three builds are not readily identifiable. North-east end of church with chancel projecting forward beyond vestry and Lady Chapel; 3-light chancel window; Lady Chapel window of 2-lights, as are the windows in the chancel returns. Side aisle windows of 2-lights with buttresses between and with 3-light windows at south-west end of aisles. South-west end of nave with 5-light window above paired central doorways with pointed heads; gabled porch in centre of south aisle; 2-centred doorway in centre of north aisle.

Interior not available for inspection at resurvey as the living was vacant. The listing description (May 1975) reports that the walls are faced with yellow brick with red and black lacing courses etc. The nave arcade is timber supported on slender cruciform columns of stone and the roofs are of timber. The Glamorgan volume of The Buildings of Wales confirms this and reports a variety of C20 glass including some by Comper.

Included for its architectural interest as the parish church, which was built in three phases and designed by three noteworthy local architects.