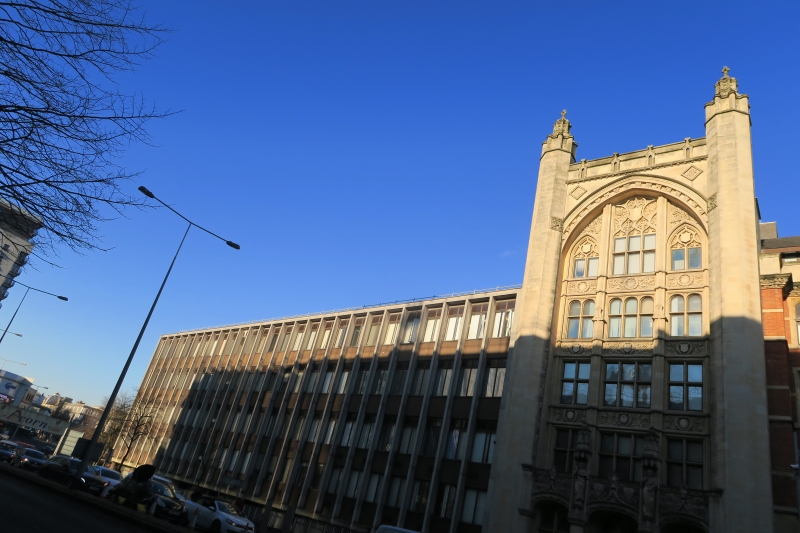 Location: To the W of the junction with West Grove and the S side of a conglomeration of teaching blocks between Newport Road and The Parade. Reached up stone steps from the street, which have brick parapet wal

Built 1915 by E.M. Bruce Vaughan, architect of Cardiff, as the Department of Physiology of the Welsh National School of Medicine. One of the last Gothic Revival designs to be built in Cardiff, it was originally envisaged as part of a quadrangle facing Newport Road, West Grove and The Parade that was not completed. A wing was added on the W side in 1964 by Sir Percy Thomas & Son, architects of Cardiff, replacing earlier detached buildings of a former infirmary on the site. The same practice also largely rebuilt the tower but retained its façade. The Newport Road elevation was completed, and a return wing built facing West Grove, replacing an earlier drill hall, by Wyn Thomas & Partners, architects of Cardiff, in 1987-93.

A Perpendicular style 5-storey tower with a lower 4-storey 7-bay block in collegiate Gothic style on its R side. The tower is Bath stone ashlar, its openings recessed between big clasping buttresses and superimposed by a moulded 2-centre arch. The arch spandrels have diamond panels with 'AD 1915' in relief, then a moulded cornice below the parapet, which has 4 narrow arched openings but is otherwise plain, with moulded saddleback coping. The buttresses have 2-tier caps with polygonal shafts at the angles and relief foliage. The main arch has label stops in the form of square panels set into the buttresses, the foliage in shallow relief. In the lower storey the buttresses have foundation tablets facing the entrance steps. On the R side the tablet commemorates the opening of the building by Edward, Prince of Wales, in 1921.

The ground-floor openings are recessed behind a 3-bay entrance portal composed of elliptical arches with blind ogee gables and carved diamond finials, and 2 freestanding round columns which have capitals with Greek relief inscriptions and carry statues of Hippocrates and Asclepius in canopied niches, while the outer responds are polygonal with foliage capitals. Above the arches are sculpted busts of C19 physicians (Pasteur, Lister, Hunter, Jenner) in the outer bays and heraldic shields to the centre. The central doorway has double doors with vertical ribs, iron strap hinges and relief-moulded foliage to the top. The mullioned overlight has an elliptical arch. The doorway is flanked by windows with 2 round-headed nullioned lights under an elliptical head. Above the entrance portal the elevation has 3-light mullioned windows flanked by similar 2-lights windows, and framed by clustered intermediate shafts with gabled offset in the third storey. Between storeys are rich broad bands of relief foliage incorporating blank oval tablets and shields. The 2nd and 3rd storeys have flat-headed windows, while the 4th storey has windows with arched lights. In the 5th storey are pointed windows but with blind Decorated tracery lights enriched by foliage in relief and blank shields. The spandrels are decorated with similar relief foliage.

The asymmetrical teaching block on the R has a full-height ashlar double canted bay R of centre. Of brick with Ham stone dressings and slate roof behind a plain ashlar parapet, except the canted bay which has an openwork parapet. A rich freestone cornice of relief foliage has sculpted animals over rainwater heads. An ashlar band is between ground and 2nd storeys. Three-light mullioned windows to the 4 storeys and basement predominate, with arched lights in the upper storey. The canted bay has pairs of 2-light mullioned windows in each storey, also under arched heads in the upper storey. The bay is flanked by shallow buttresses which have blind panelling in the 2nd storey beneath gablets. The block is extended E by the wing added 1987-93. On the L side of the tower is the wing added in 1964 when the tower was rebuilt behind the facade. The wing is 4 storeys and basement with flat roof, constructed by means of a reinforced concrete frame with closely spaced full-height columns continuing the lively vertical emphasis of the tower, with glazed and fluted steel-panel infill. Additions have been made to the rear of the teaching block.

The interior of the tower was reworked in 1964 by Sir Percy Thomas, whose name is engraved in the marble wall panels. The ground floor windows retain original stained glass with heraldic shields, and roundels in the tracery lights dated 1915 and 1918. The teaching block to the R retains an original spine corridor that has fielded wood panelling to the walls, above which are keyed oculi. At the E end of the corridor is an open-well stair with plain balusters and hand rail.

Listed for high architectural interest as a prominently-sited Gothic Revival tower-facade retaining high-quality sculpture. Contemporary range attached to right and 1964 range to left are also included because they are integral to the main tower.