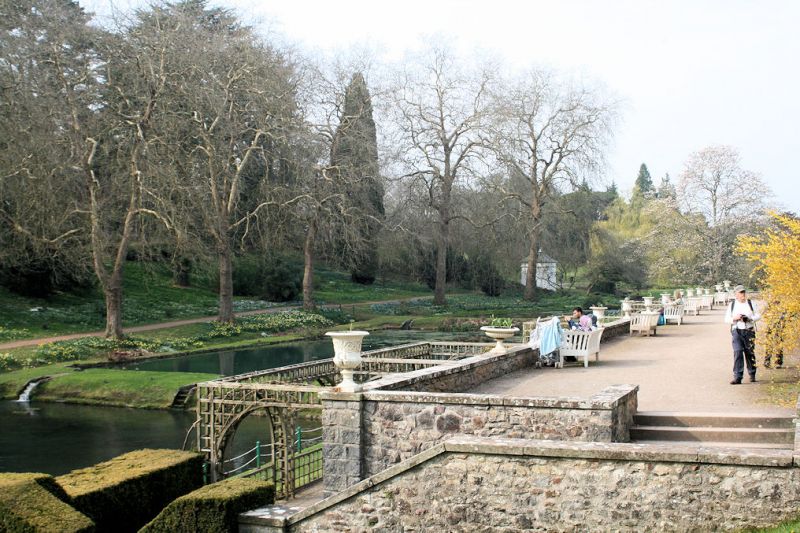 Entry Name: Italian Terraces on north-east side of Fishponds in Garden of St Fagans Castle

Location: One of the associated structures in the gardens of St Fagans Castle and part of the Museum of Welsh Life.

The stone revetted terraces are probably 1864-71 when Lady Mary Windsor entered her main period of the development of the house and garden, but they seem to follow the lines of c1600 terraces from the Elizabethan garden as indicated on the 1766 plan. The plan of 1855 shows the rudimentary beginnings of the present terraces and they probably became progressively more elaborate. They were finally completed as today in 1905 when the statues were added. The Jacobean type balustrading goes with the W P James work on the house in the late 1860s but Italian terraces were popular from about 1850 onward and continued so into the Edwardian period although they were by nature extremely expensive; as they certainly would have been with this difficult site.

To north-east of the fishponds and below 'Battlement Walk', the land rises in a series of terraces. The lowest gravel path is bounded on its north-east side by a terrace wall of stone rubble with pilasters of roughly dressed stone laid in irregular courses; stone slab coping; thirteen bays and two part bays. At each end, a flight of steps rises to a second terrace or gravel path, in the middle of which there is a double stone staircase each half of two flights, the lower flights rising outwards at 180° to each other to a landing and then each turning through 180° to itself and the other stair to rise onwards to a third gravel path or terrace; the double stair has stone walls with pilasters; parapet panelled with circular stone foils; at outer ends of upper parapet wall there are cast lead figures of musicians, of a flautist at northern end and of a lutenist at southern end, these are by W C May. From a point parallel to the middle of the upper parapet wall of the double stair, a flight first of seven steps rises to a landing, turns through 90° rises through four steps and then through three up to a further gravel walk which is bounded on its eastern side by the retaining wall to the top terrace; this wall is very low at its northern end but at its southern end forms a high embrasure to a large, steep-sided rectangular bay or balcony with buttresses and similar stone parapet. At the southern end of the terraces there is a steep descent to the fishponds by a high flight of about forty or fifty steps.

Included as an important garden feature and one of the structures associated with the gardens and estate of St. Fagans Castle.