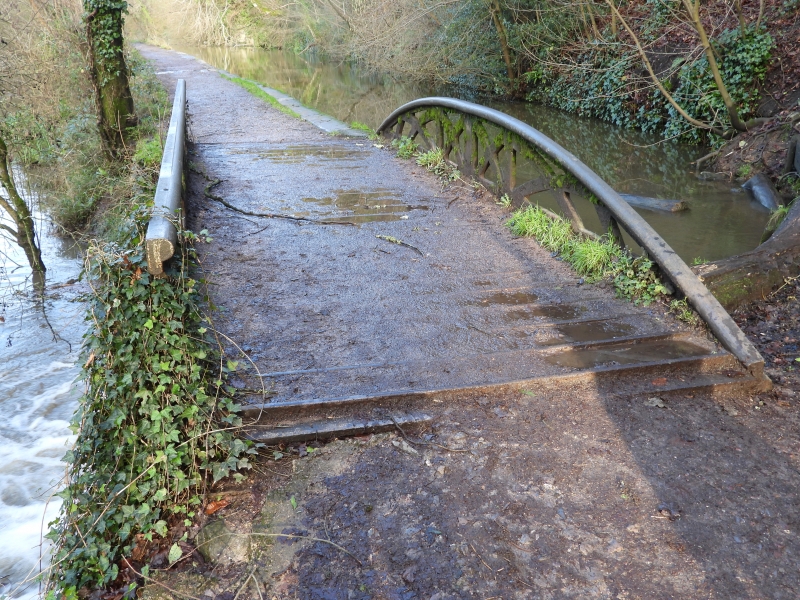 Location: About 50m north of the junction with Fforest Farm Road and 300m west of Whitchurch Hospital.

This bridge is dated 1851, but see below. The Glamorganshire Canal was built by a consortium of Merthyr Tydfil businessmen, led by the ironmaster, Richard Crawshay, to ease the carriage of their products down to Cardiff and the sea. It opened in 1794 and was immediately very successful. It rapidly became very overcrowded and eventually was given competition by the Taff Vale Railway which ran alongside from 1841. Despite this the canal continued to flourish for most of the C19 but traffic then declined rapidly after the railways opened new coal docks at Roath and Barry in c1890. The canal finally closed in 1942 and is now mostly under the main Cardiff-Merthyr road. This bridge, despite being dated 1851, could well be contemporary with the opening of the canal, note the similar bridge (qv) about 500m south. The side with the curved top may have been replaced in 1851 after being broken.

Cast-iron towing path bridge with stone abutments over an overflow from the Glamorganshire Canal into the Melingriffith Feeder. Cast iron road with trellis iron parapets. A flat parapet with coping on the Feeder side and with a bow-shaped parapet without coping on the Canal side. This latter was probably to allow tow ropes to pass more easliy as this section has a widened stretch for a winding hole. Compare with the similar bridge about 500m south beside Melingriffith Pump.

Included as an attractive structure of special technological interest and associated with an important canal.