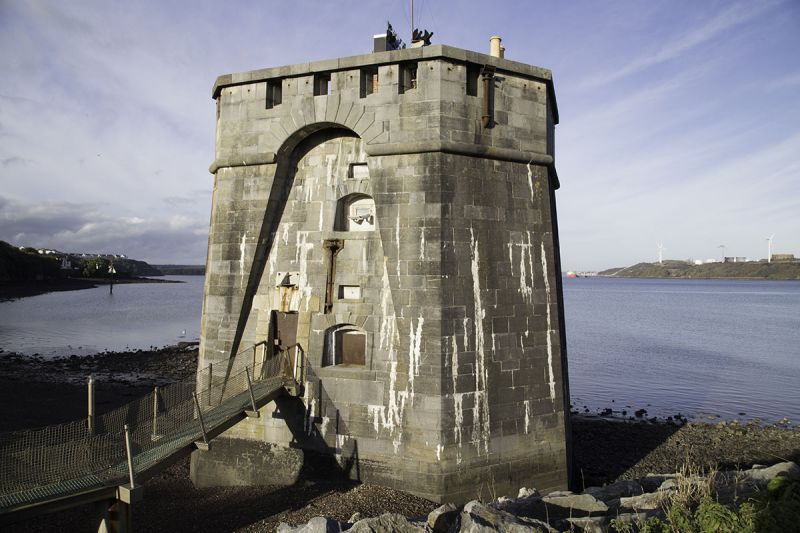 Location: Situated just off foreshore at W end of road running along S wall of Dockyard.

1848-51 defensive tower built by J. and C. Rigby, contractors of London, for the Board of Ordnance; one of a pair with the North East Tower at Front Street. Known locally as ‘Martello Towers’ or ‘Cambridge Towers’, these were intended to defend the Dockyard from landward and seaward attack supplementing the guns at Pater Battery and the Defensible Barracks.

Surviving plans of 1861 record that the tower was begun 11/11/1848 and completed 30/5/1851. It contained a basement magazine for 50 barrels of powder, a 4520 gallon water store, and accommodation on two floors for 14 men in beds or 24 in hammocks and on the roof were one 32-pound gun on an iron traversing platform and four 12-pound brass howitzers mounted on garrison carriages. The principal purpose was to command the land rather than guard against attack from the sea. The armament appears to have been dismantled in 1881.

Limestone ashlar, basement and two storeys. Island fort of irregular octagonal plan, the sides steeply battered with heavy bull-nose moulding under high parapet pierced with gun loops on E, SE, and S sides. Windows are small and doubled as gun-loops, camber headed with raised shouldered surrounds and voussoirs, and over each is a smaller horizontal opening in thin raised surround, for smoke ventilation. E side has recessed parabolic arch breaking cornice with rusticated voussoirs above. To lower floor left is iron door in granite rusticated frame with keystone inscribed: 'VR 1851'; window to right and similar window above, both with horizontal vents over. Iron hoist bracket between floors. Broad chamfered windowless NE angle, narrower SE angle with two square gun-ports. S side is similar to E, parabolic arched recess with two horizontal gun ports. N side, W side and SW angle are all narrower with window and vent on each floor. W side obscured by affixed navigation marker.

An important example of Victorian military engineering. Group value with other listed structures at Pembroke Dockyard.