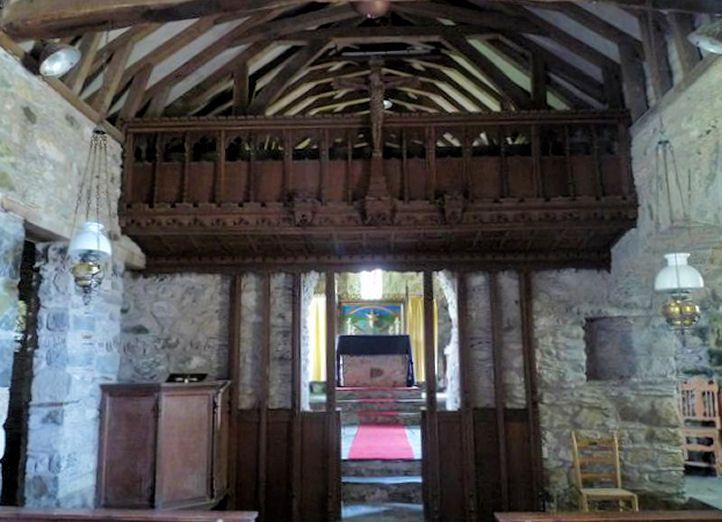 Medieval origins, rebuilt from ruins in 1926 by J Coates Carter, architect of Cardiff and Penarth. Arts and Crafts style making careful use of local materials.

Long and low interior with exposed stone walls, cambered tie beams to roofs and scissor-rafters. Medieval, possibly C13, octagonal font with sides splayed in to chamfered base over circular shaft. Simple open-back pews. Built out passage in N wall gives access to pulpit and to rood stair, the pulpit three-sided and simple in the angle to the screen, which is exceptionally fine with rood-loft and carved Crucifixion to front. Loft is reached by mural stair to N and closes low rough stone chancel arch. S transept has splayed NE opening into chancel. Altar with coloured gesso on timber altarpiece, brought forward. Stained glass in E window of c1926, in S transept c1926 and in nave S c1938.

Church was rebuilt from ruin in 1924-6 for the Thomas family of Trehale, St Edrins. It is a rare example in W Wales of a church built according to Arts and Crafts principles, that uses the simplest available local materials without attempt at period styles.