A Grade I Listed Building in Uplands, Swansea 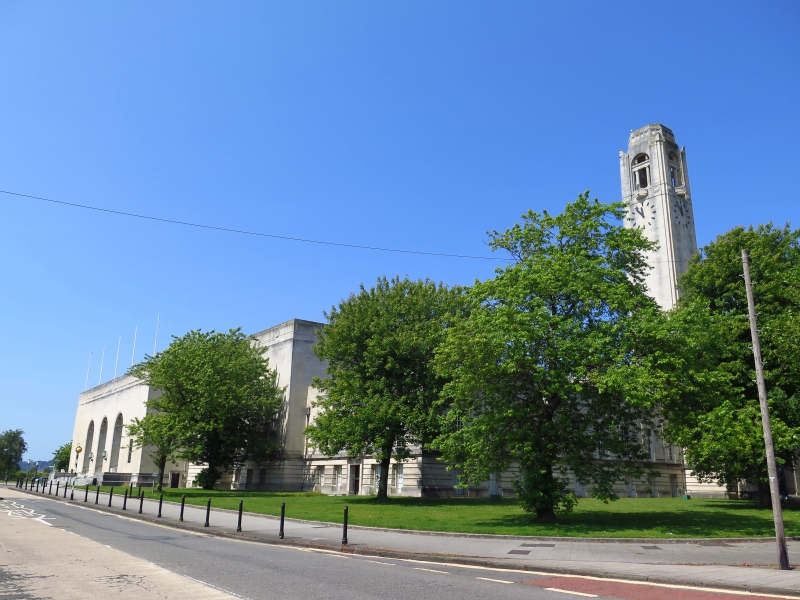 SE block (Brangwyn Hall) has parapet with roundels depicting the arts. Lower entrance block has panelled frieze; steps up to three deep arches with coffered soffits; glazed bronze grilles and panelled bronze doors; to each side of central arch, bronze lamp mounted on wall; window to each end with bronze grille; steps up to entrance have podium to each end. To L of entrance, lower block with 3 windows; return to L has 3 windows centre emphasised by architrave and balcony to upper floor, and doorframe with medallions to ground floor.

SW Block comprises law courts linked to flanking blocks by flying passages which have segmental arches and relief medallions; square panelling to parapet and royal arms to front. Tall coffered arch to central entrance with bronze glazed screen and pedimented doorcase with panelled doors; entrances to public galleries in jambs of arch; bronze lamps to each side. Four windows to each side of arch; returns of 10 windows; 4 lunettes above lighting courtrooms and assize hall. Rear, facing courtyard has round arch with inset Portland stone pedimented doorcase surmounted by relief of scales of justice.

Graded I as the most important building in Wales of its period, with a particularly fine and virtually unaltered sequence of public spaces, and as an outstanding example of the work of an architect of particular significance to Wales.