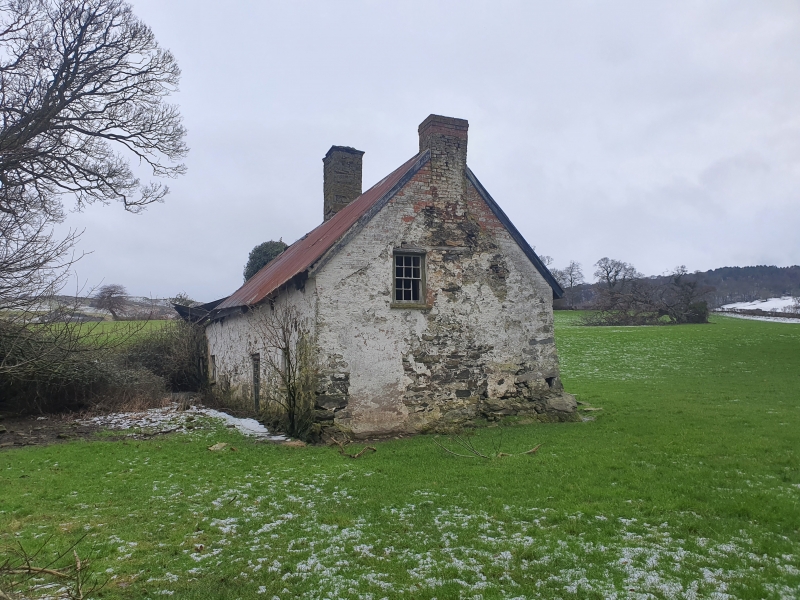 Location: Situated 2km W of Betws yn Rhos and approximately 0.5km S of Dolwen close to Coed Coch. Sited end on to the slope which is cut away along W and S sides.

Late C16 or early C17 one-and-a-half storey farmhouse of chimney backing on to cross passage plan. Whitewashed rubble elevations with corrugated iron said to conceal the remains of a thatched roof; the overhanging eaves have been raised - see heightening in red brick especially on gable end. Massive central stone chimney stack with later brick stack on the downhill gable end. The front, to the E, has a boarded door entrance offset to the right of the main chimney, and another doorway with a half-glazed door at the uphill corner; both have horned 6-pane sashes to the R. The uphill gable end has boarded loft door and the downhill end has a horned 12-pane sash. The rear has a mixture of 6-pane hoppers and horned sashes including one small and deeply-recessed attic window; the masonry break relates to the blocked former cross passage doorway.

Beamed ceilings to ground-floor, the best now being to the parlour which has stop-chamfered detail and has later been carved with the date 1759; the hall ceiling has been plastered over. The main walls are battered on the inside and have deep window recesses with ledges; main partition walls are also stone. Boarded doors and massive timber lintel to main fireplace, beside which is the staircase. Downhill parlour has chamfered joists and axial beam but later fireplace so it appears to have been originally an unheated parlour. The cross-passage has been blocked to rear and turned into a small room between the main chimney and the parlour. Dairy to uphill end at rear. Although the eaves have been raised in C19 the original sub-medieval roof structure is retained; it is A-frame with windbraces and two rows of purlins; studded partitions to attic.

Listed for its special interest as a sub-medieval farmhouse with well-preserved historic character.