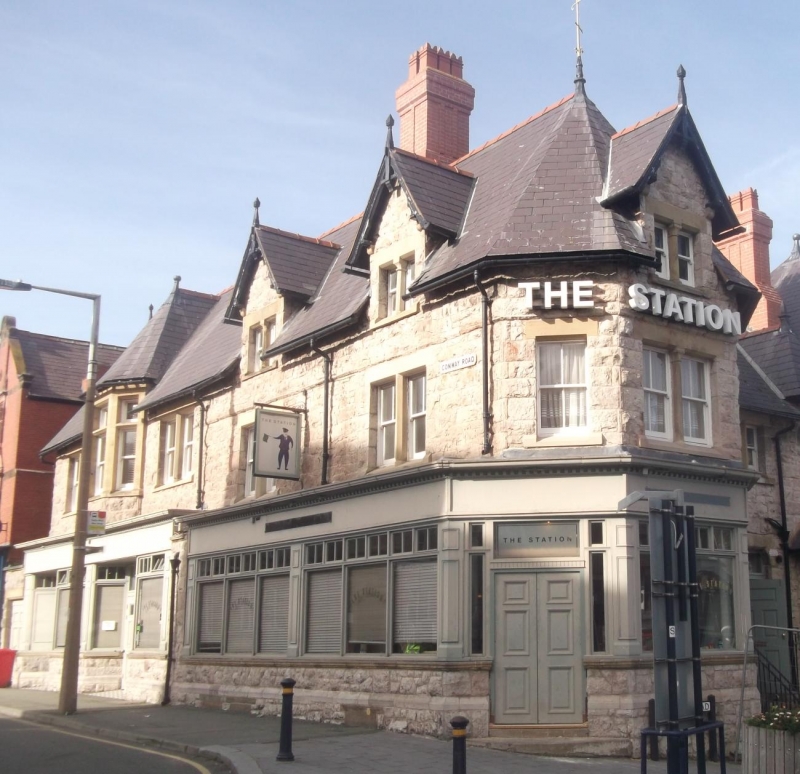 Location: On the corner of Station Road and Conway Road.

Built c1870 (the building is marked on the first edition Ordnance Survey map of 1875), and possibly to designs of John Douglas, architect, of Chester, John Douglas was the architect used by John Pender, who owned the Pwllycrochan estate between 1865 and 1875, where he planned to establish a new resort. By 1879, a promenade and a hotel had been built, and Station Road had been laid out (though not completely developed). The hotel, which no longer survives, was certainly to the designs of Douglas, and the Central Public House (formerly called the Station Hotel) bears strong stylistic resemblances to it in its muscular Gothic style.

Conway Road block: 5-window range, with continuous (renewed) public house front to ground floor, with doorway across angled corner. Upper windows are mainly paired sashes with engaged shafts as central mullion, and flat stone heads, but there is a mullioned and transomed canted oriel window towards the left, breaking the eaves line, and with its own canted hipped gabled roof. Small paned sashes in dormer gables.

Station Road elevation: irregularly massed, the recessed central section has blocked doorway with shouldered lintel (now a window) to first floor has small-paned sash windows to the left, and a hipped roofed dormer window breaking the eaves line to the right. Higher block to the right has entrance to the left, with single sash window over it, and paired sashes beneath hipped dormer. Full-height canted bay window with canted hipped roof. Eaves throughout have strong overhand, and are carried on brackets over the dormers.

Significant as an example of the earliest phase of the development of Colwyn Bay as a resort, the building’s domestic Gothic style is one which appears to have been used for much of the early phase, but which is now scarce. It forms part of an important group of commercial buildings at the centre of the town, and exploits its site and style to create a dramatic composition.