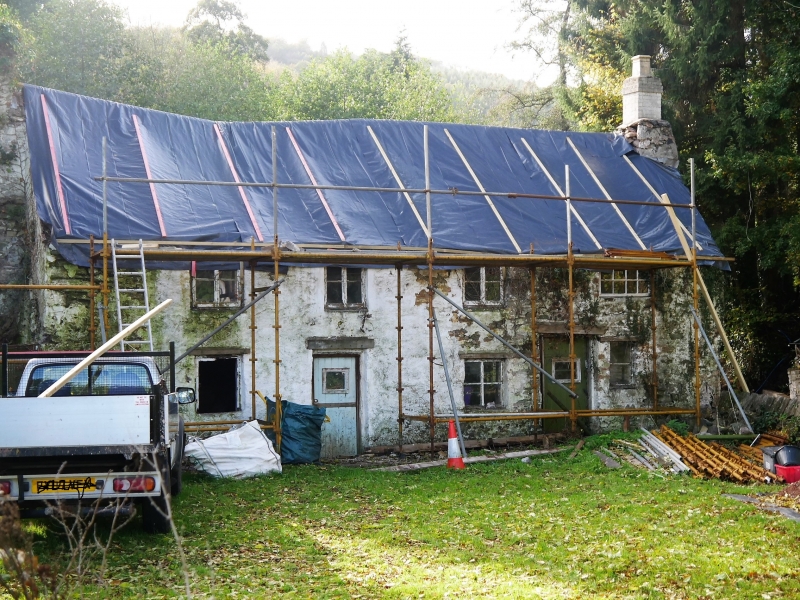 Location: Set back from the main road approximately 0.5km north of Tintern Abbey and opposite the former Abbey mill. Immediately on the north side of the A466 bridge over the Anghidy River.

A house with C17/C18 origins with mid C19 remodelling and enlargement. It was probably the miller's house and attached cottage. It received its last refurbishment in the mid C19 and has not been altered since.

The house is constructed of whitewashed rubble stone with a steep Roman-tile roof (probably originally stone-tile) and whitewashed end chimneys with later brick stacks. Two storey double depth plan with an addition, perhaps a wash-house, to the left gable. The four window front conceals the fact that the left-hand two windows form part of the C19 enlargement while the right hand part is the original house. All the windows appear to be mid C19 timber casements under timber lintels, 3 3 panes below and 2 2 above, but the right hand end of the front is now heavily masked by creeper. Plain boarded doors, that to the left is the main entrance though that to the right is broader. Plain roof with external stacks with off-sets at both ends. Stepped down to left is a single-storey outhouse with similar window and boarded door to front and another to gable end; the rear pitch of this outhouse has pantiles not Roman tiles. Largely blank rear wall which is single storey and partly masked by ivy. A C19 plank door in the centre is in the original part of the house as is the single casement to left of this.

The description is taken from the previous listing (1994). The interior was not available for inspection at resurvey as the building is disused. The main entrance is into the later part with central timber dog-leg staircase and stepped down parlour to left. The hall to right has beamed ceiling and one especially large chamfered beam in the space between the stairs and the hall. This end has a gable-end staircase winding around the chimney stack. The collared roof trusses are concealed but appear to retain some original purlins. Boarded doors.

Included as a now very rare unaltered house from the mid C19, and for the special interest of its prominent and well-preserved historic character within the village of Tintern.