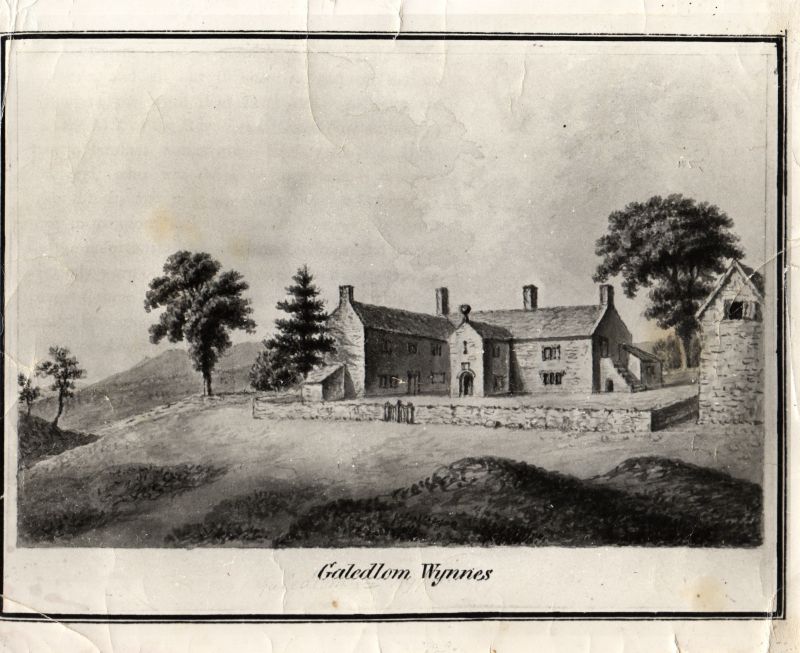 Location: Approximately 0.75km SE of Ysceifiog church and reached by farm road S of Ffordd Gledlom between Ysceifiog and Lixwm.

Comprising 2 houses built according to the unit system. The earlier house is late C16 or early C17, and the later is dated 1645 with the initials WW for the Wynne family, one of the descendants of Ednowain Bendew, the C13 Lord of Tegaingle, whose arms are also on the building. The earlier house appears originally to have consisted of a hall and parlour, while the upper house probably comprised hall and kitchen. A drawing of the house made in the late C18, and attributed to Moses Griffith, shows it almost as at present, although some windows have subsequently been altered, probably c1900.

A large L-shaped farmhouse facing a small C18 walled garden, comprising the earlier, lower house built across the slope, and a the later upper house at near right angles up the slope. Both houses are 2-storey, the lower house with a higher eaves line, and of rubble stone with roofs of C19 local slate replacing original thatch. The lower house has a rendered brick end stack to the L. It has a central added gabled brick porch now with its doorway converted to a window. Its original windows have stone mullions with plain chamfer. These comprise a 3-light window R of the porch, and in the upper storey 3-light windows to the centre and R, and a 2-light window to the L. An added projection under a hipped roof is built against the L gable end, with single windows to the front and side and door and window to the rear. The rear of the lower house has two 2-light casements added c1900 in both storeys, and a small former stair light upper R.

The front of the upper house is dominated by its fine 2-storey porch offset L of centre and with a higher eaves line than the house. The doorway has a moulded segmental head and half-glazed door, above which is a dated tablet with initials WW and coat of arms. In the upper storey is a 2-light window with Gothic Y-tracery and small-pane metal glazing. The apex has an octagonal stone pinnacle with ball finial. On the R side of the porch are an inserted doorway, and a window to its R with late C20 detail. A further casement window is upper R. Against the R, uphill, gable end are brick steps to an inserted doorway with brick jambs and a half-glazed door, but replacing an earlier doorway with external steps shown in the C18 drawing of the house. The rear of the house has a 2-light stone mullioned window lower L lighting the kitchen, to the R of which is a small inserted window and a former first-floor doorway now blocked and converted to a 2-light window. A single-storey gabled projection, added in the period 1850-71, is L of centre, and has an inserted window to its R side wall. To the R of the projection are windows renewed in openings of c1900, then the massive external hall stack, with a tall shaft. On the R side of the stack is a lean-to ty bach of c1900 with boarded door and wood-framed window. The downhill gable end of the house has a 3-light window to the hall with ovolo stone mullions and a hood mould, all now enclosed within an added glazed conservatory. Above is a 2-light casement inserted c1900 to the upper storey, and blocked former pigeon holes beneath the apex.

In the upper house the hall is now subdivided by a corridor across the front of the house, an alteration made c1900, but a single cross beam with broach stop has survived. The hall fireplace has an unmoulded timber lintel. The hall fireplace in the lower house is reduced but evidence for an original fireplace stair is provided by an arch by the fireplace in the upper storey and a small stair light in the rear wall. The mullioned windows in the lower house have flat internal faces.