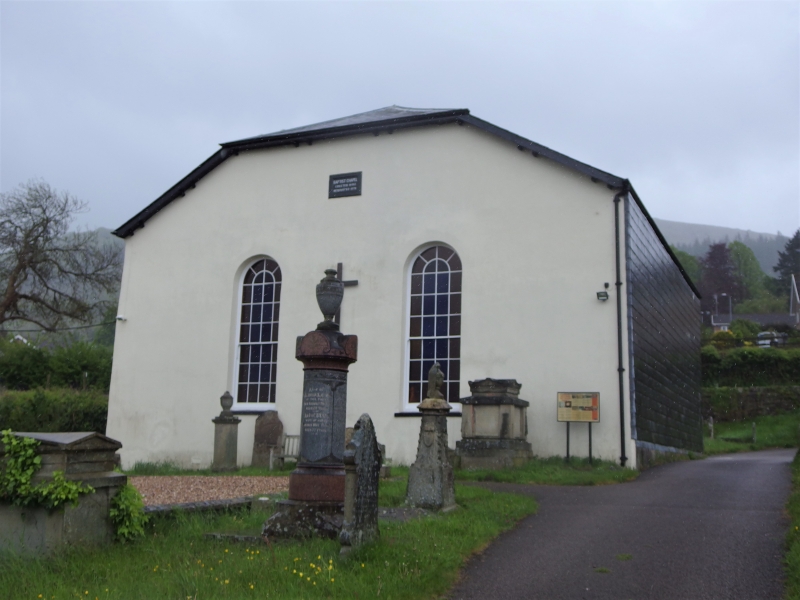 Location: Situated near the centre of Govilon in a large burial ground immediately north of the Monmouthshire and Brecon Canal.

Llanwenarth is recorded as the oldest Baptist chapel in Wales; the cause was founded in 1652. The existing building is the result of several remodellings but has its origins in a chapel of 1695; in the C18 it was doubled in size and was then remodelled again, principally in 1869-70. Further renovation in 1893 and major recent restoration.

This broad chapel has a distinctive half-hipped slate roof with rendered elevations, except to the west which is slate-hung. 2-storey, 2-window main front to south with plat band and C19 16-pane sash windows which are camber-headed to the ground floor. Offset entrance with recessed replaced doors. The downhill end has a pair of tall round-headed sash windows with horned small-pane glazing; date-stone to top. Blocked doorway to east side.
Burial ground retains a good collection of Georgian and Victorian tombstones. Boundary wall retains iron gate, in ogee Gothic style, on to canal bank.

Substantially C18 interior with gallery to three sides and box pews; the original church was the northern half of the present structure. The raked gallery has balustraded front and is carried to the front on cast-iron columns and to the middle on full height octagonal chamfered piers; the latter were inserted when the building was doubled in size and the gallery built. Simple box pews with panelled backs and doors; pews are angled to sides. Modern ceiling with roses. The pulpit, to the centre of the north wall between the tall round-headed windows, is inscribed with the following dates and initials '1706, I E 1737, R 1869, 1696 F L, 1955'. The baptistery is below; fireplace on the east wall and there are staircases to either side of lobby.

Graded II* for the historical importance of this Baptist chapel and the surviving elements of its C18 interior.